EXPLORING DENVER AND ITS ENVIRONS

My friend Alyson and I both recently had a week off between jobs and decided to go on a last minute getaway. In choosing a locale, we were looking for a relatively cheap destination that was easy to get to from multiple cities (she lives in Boston and I live in NYC). Denver popped up on both of our flight searches and we were lucky enough to find flights that arrived/departed within 20 minutes of one another. I’ve flown into Denver many times for ski trips and work trips, but have rarely spent time exploring Denver and its surrounding areas. As I started to research for the trip, I was so impressed by the number of awesome activities, hotels and dining options I came up with. Denver is definitely an up and coming travel destination and I would recommend it to anyone as an easy long weekend getaway.

We flew into Denver on a Sunday morning and headed straight from the airport to Estes Park, a town just outside of Rocky Mountain National Park that is only about an hour and a half drive from Denver. In Estes, the Stanley Hotel stands perched above the town. 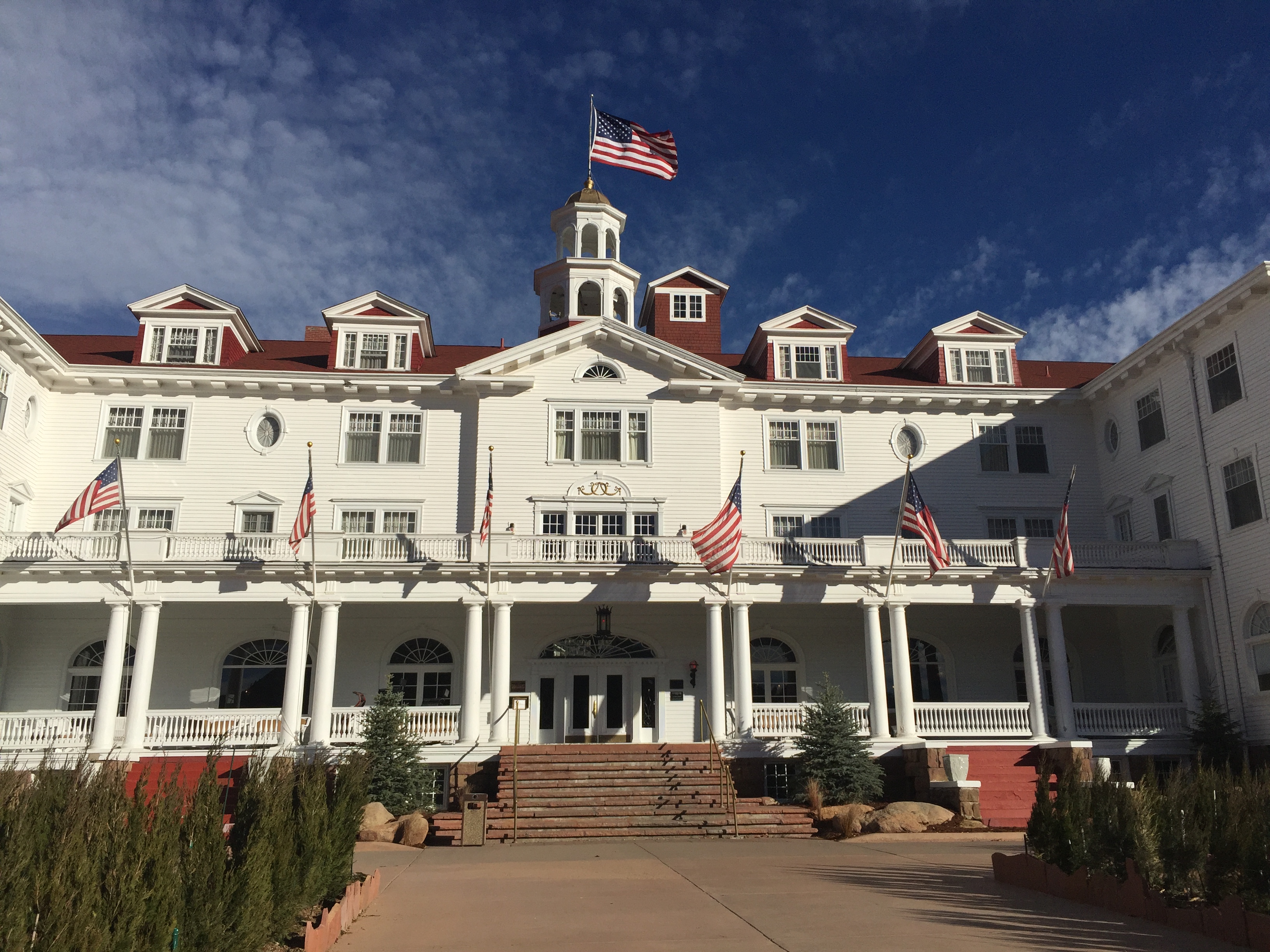 A historic hotel dating back to 1909, the Stanley is also known as one of the most haunted places in America and was also the inspiration for Stephen King’s The Shining (they also filmed the movie there). The hotel is only 20 minutes from the National Park entrance so it’s a very convenient place to stay when visiting. We enjoyed several great meals in the hotel’s restaurant, Cascades, which features local American cuisine and ghost-themed cocktails (try the REDRUM).

We also signed up for the one of the nighttime ghost tours offered at the hotel. While a bit kitschy, it was a fun way to spend the evening and we enjoyed hearing the history of the hotel which was part of the tour.

It’s such a treat to find a beautiful National Park so close to a large city, so I definitely recommend at least a day trip. Our favorite hike was a 5-mile roundtrip that we took to Cub Lake. It offered varied terrain, beautiful mountain vistas and a lake destination. Plus, we saw herds of elk, and even two males up close in the woods. 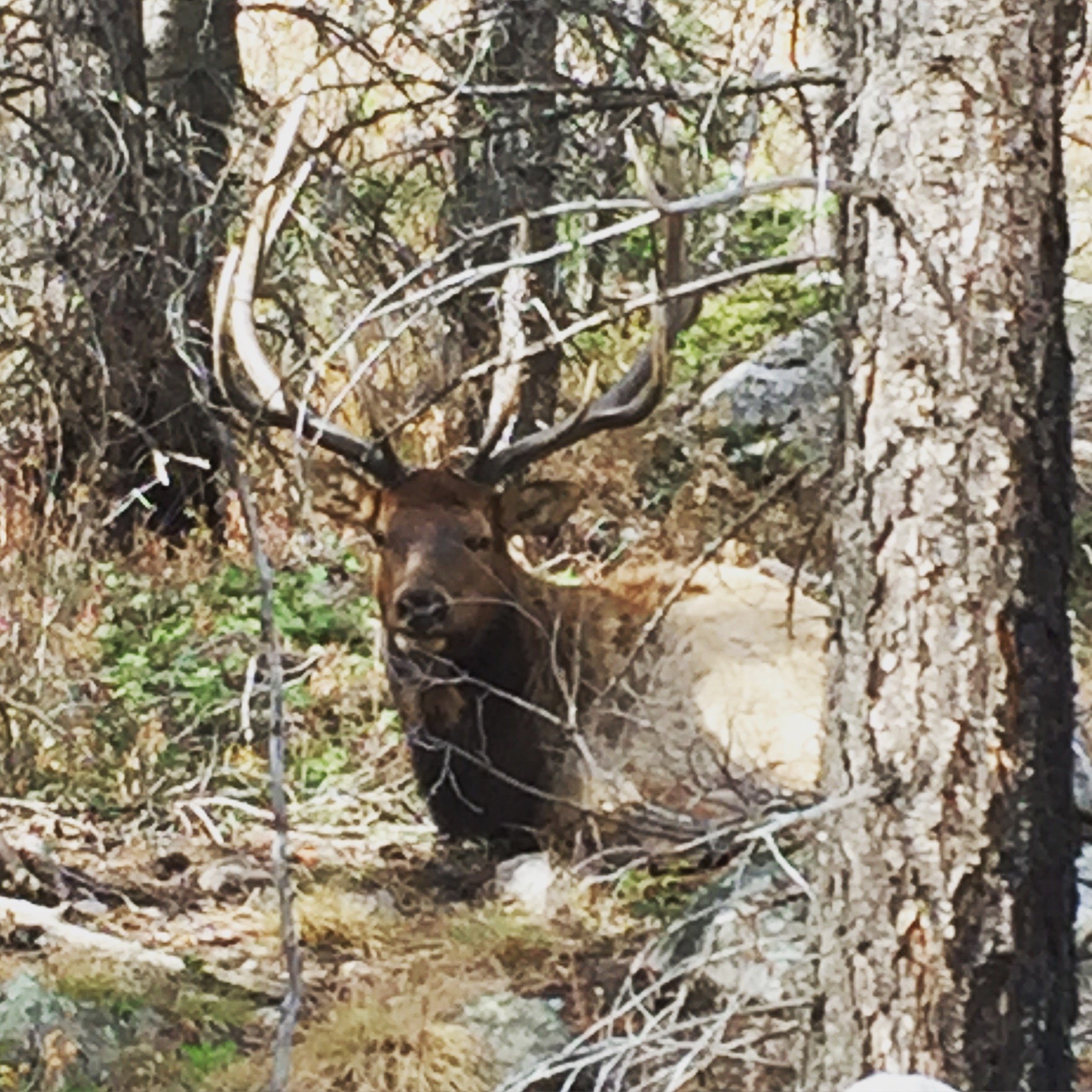 Depending on the time of year you visit, the Bear Lake area is also very popular for hiking, and offers access to several trailheads. But, given the high elevation of that area, it was too snowy for our visit in early November.

Boulder is only about 20-30 minutes’ drive from downtown Denver. And if you’re driving to Denver from Estes Park like we did, it’s on the way and makes a great pitstop for lunch. After our long hike to Cub Lake, the delicious meal we had at The Kitchen was delightful (although there is also a location in Denver, if you miss the trip to Boulder). Boulder also has a great pedestrian mall downtown on Pearl Street, and it’s definitely worth walking around and popping into the cute shops and boutiques. For an afternoon pick-me-up after shopping, definitely stop in at Boulder Baked, for one of their “baked to order” cookies.

On to Denver! We stayed at The Art Hotel in the Museum District.  The hotel was very comfortable, conveniently located and a museum in itself! The hotel features several temporary and permanent modern art installations for guests to enjoy – everywhere from the lobby to the elevator. Our first full day in Denver, we headed out in the morning to Core Power Yoga near our hotel for a great yoga class. Then we headed out for lunch and local beers at The Source, an artisan food market in the River North (RiNo) District. 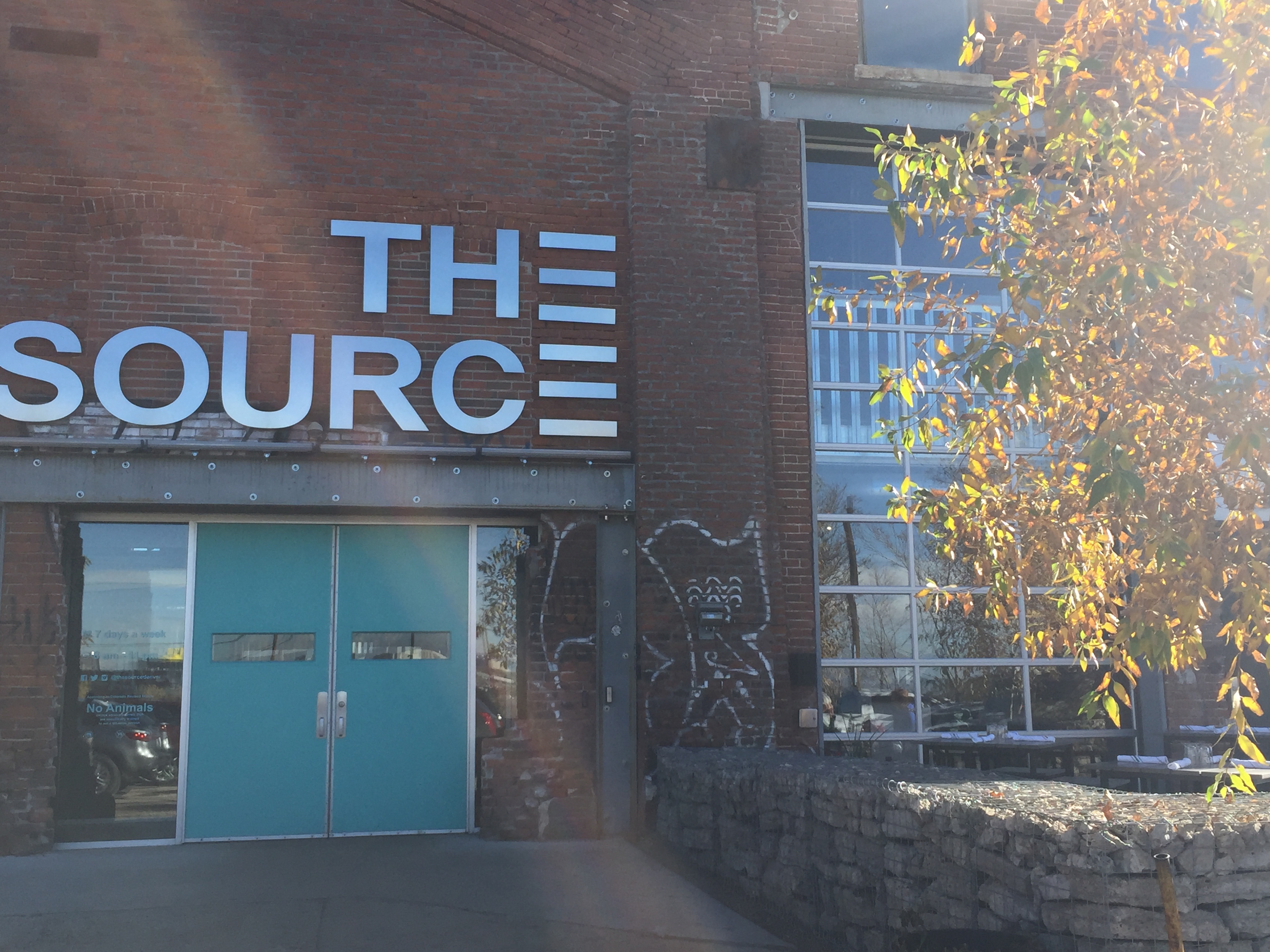 I definitely recommend the tacos at Comida, a former taco truck serving Southern-influenced Mexican street food. My favorite was the Shrimp and Grits taco. That afternoon, we spent some time shopping on the 16th Street Mall (check out Tattered Cover Book Store for an old fashioned brick and mortar bookstore) and at the boutiques in Larimer Square. In the evening, we took a little drink tour before dinner. Our first stop was The Great Divide Brewing Company for a tasting (they offer 3 oz pours for $1 each!) and our second stop was Terminal Bar, located in the historic ticketing office of Union Station. 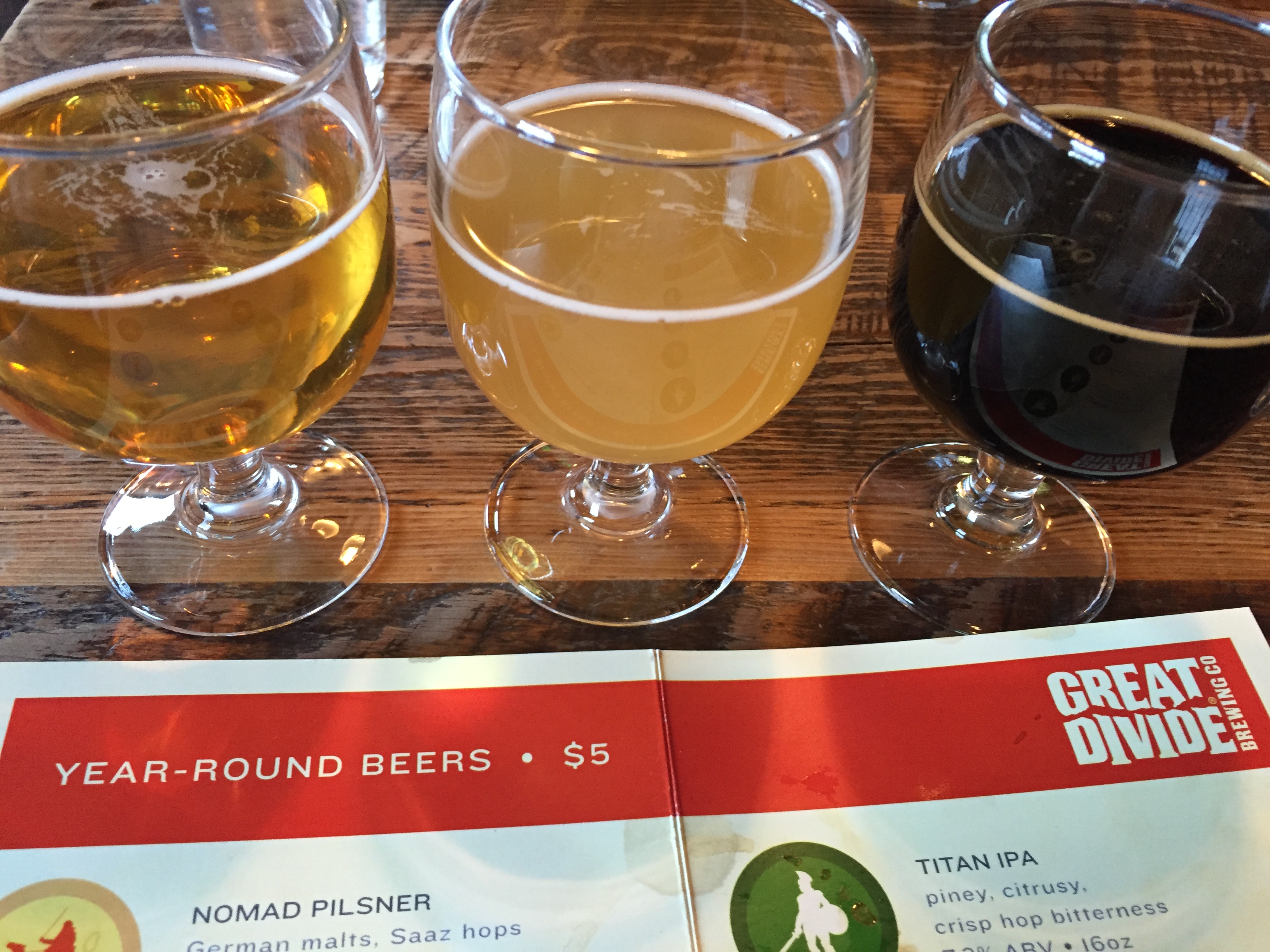 Beer Flight at The Great Divide

For dinner, we headed to ChoLon Bistro and were completely blown away. The flavors were sublime and each dish was more innovative than the next.

On Day 2 in Denver, we got in a quick workout at Pure Barre in Cherry Creek and then went out to brunch at Sassafras. The food was delicious (I had cheesy grits with poached eggs and bacon) but my favorite was the make-your-own mimosa flight, which was just too cute! 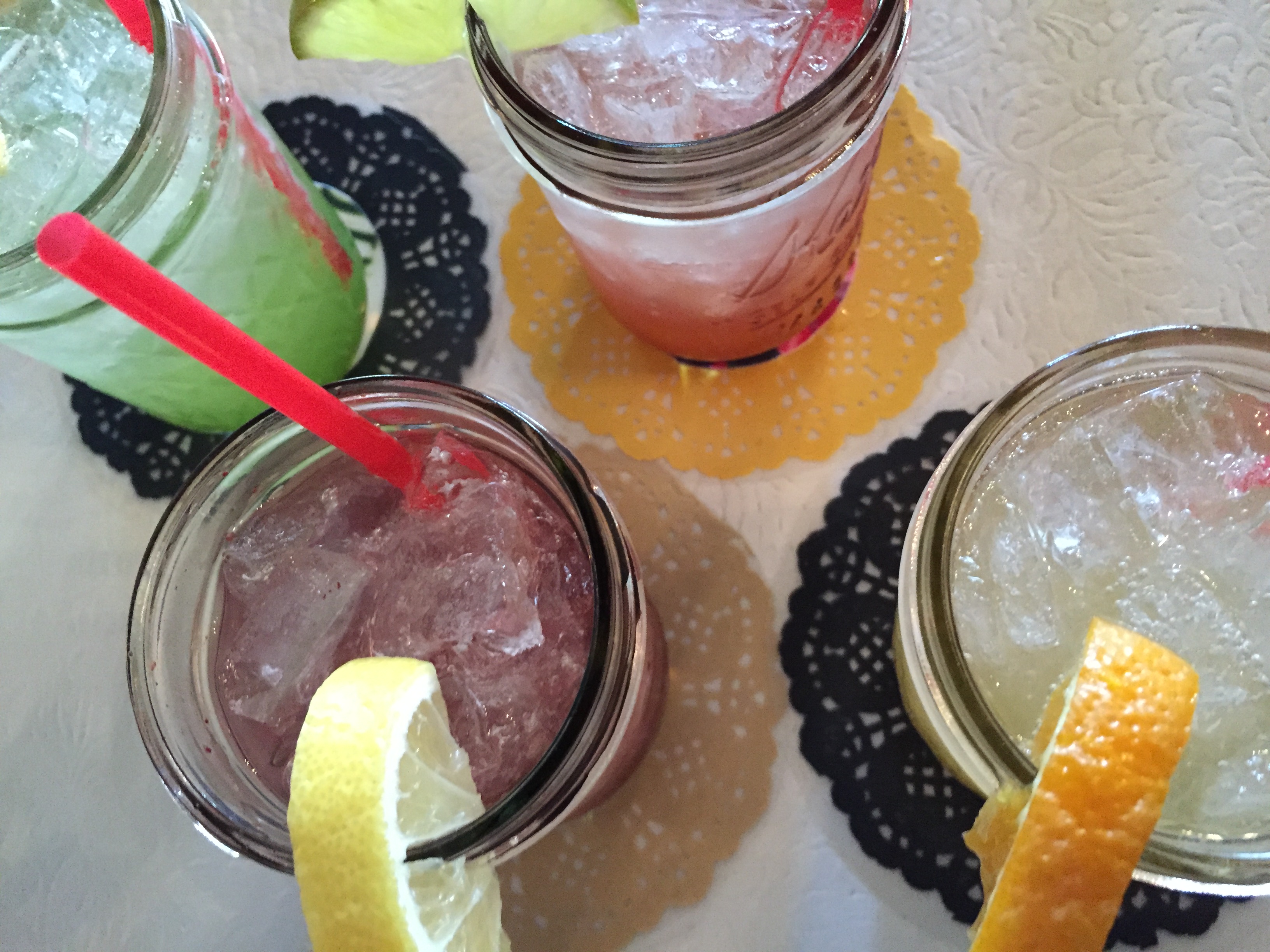 That afternoon, we spent hours exploring the exhibits in the History Colorado Center which were so well done. The highlighted exhibit featuring Toys from the 50s, 60s, and 70s was particularly fun, although we also enjoyed the more permanent exhibits around the history and environment of Colorado. The exhibits were very engaging and great for kids, but also fun and educational for adults.

For our final evening, we took a shop owner’s recommendation to visit Williams & Graham, a speakeasy posing as a bookshop in The Highlands. 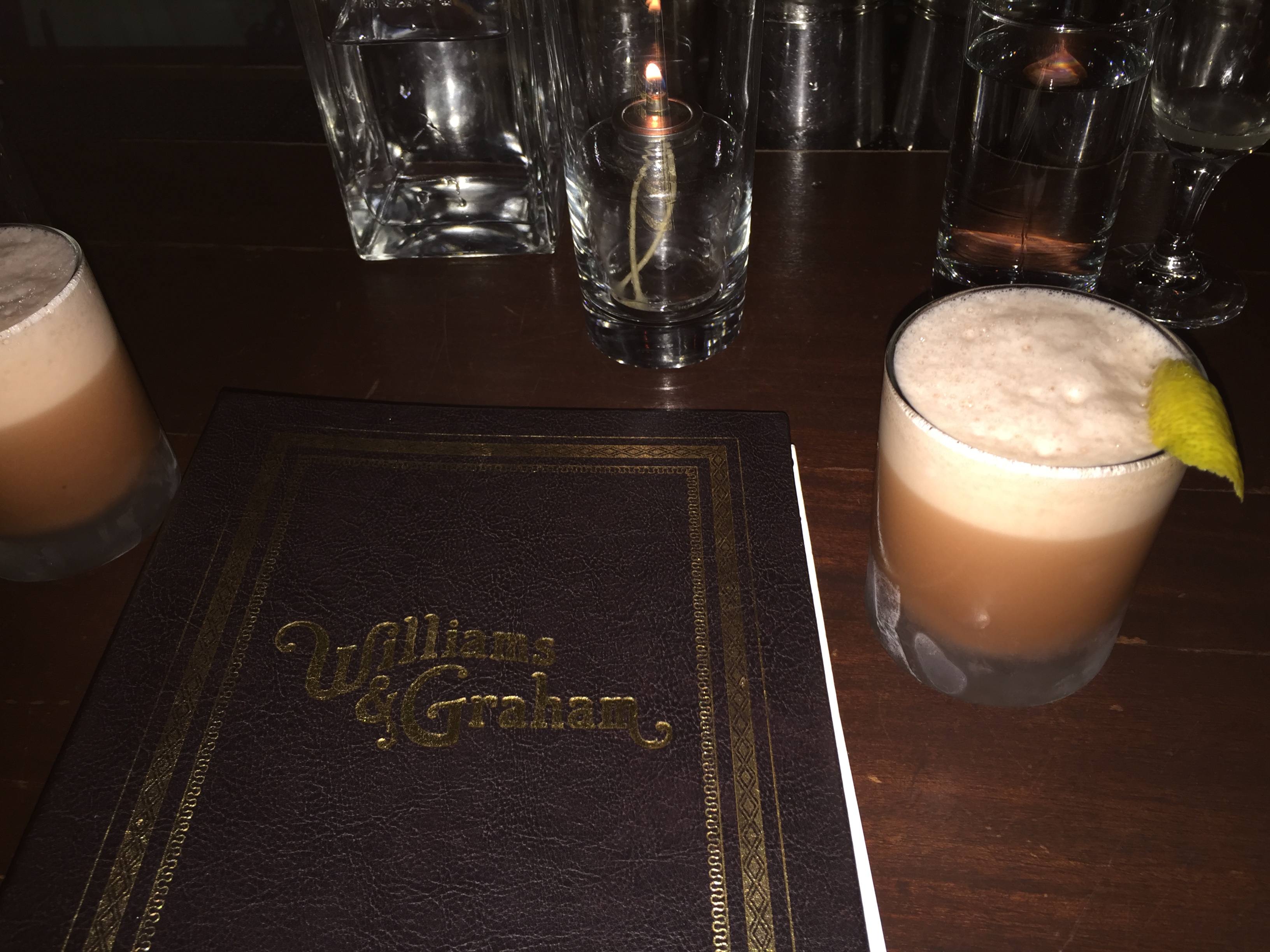 The cocktails were fantastic, but the atmosphere was just perfect – complete with walking through a fake bookcase to get to the bar. For dinner, we ate at Linger, which is housed in an old mortuary and features globally-inspired plates. The food was delicious and more wallet-friendly than ChoLon Bistro, although the portions were a bit large. The food is meant to be shared, so with only two people it was a little difficult to taste a variety of things without being overwhelmed by food.

All in all, we had a fabulous trip exploring Denver and its environs!