Following a recent work trip to Cologne, my friend and I decided to take advantage of our European location and hopped on a quick flight to Edinburgh for a long weekend. The capital of Scotland, Edinburgh is home to the Scottish parliament and is the seat of the UK monarchy in Scotland. The city is so picturesque and steeped in history – plus it’s extremely walkable and easy to see in just a couple of days. 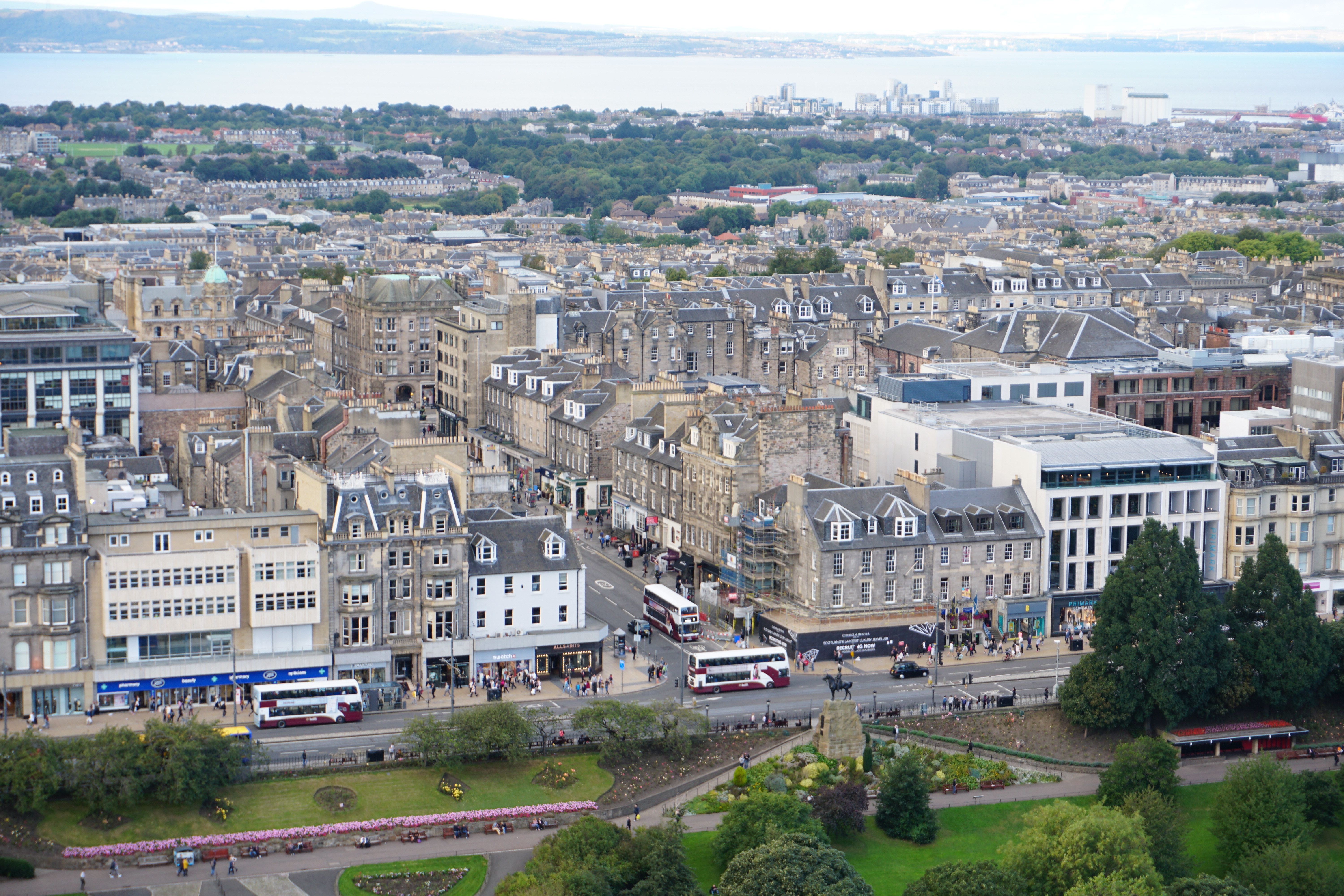 The Balmoral Hotel is a five-star property located in the center of the city. A hotel since 1902, this historic building originally operated as a traditional railway hotel, due to its proximity to the Waverley Train Station. This is definitely the place to stay if you’re looking for an iconic and luxurious residence during your stay. 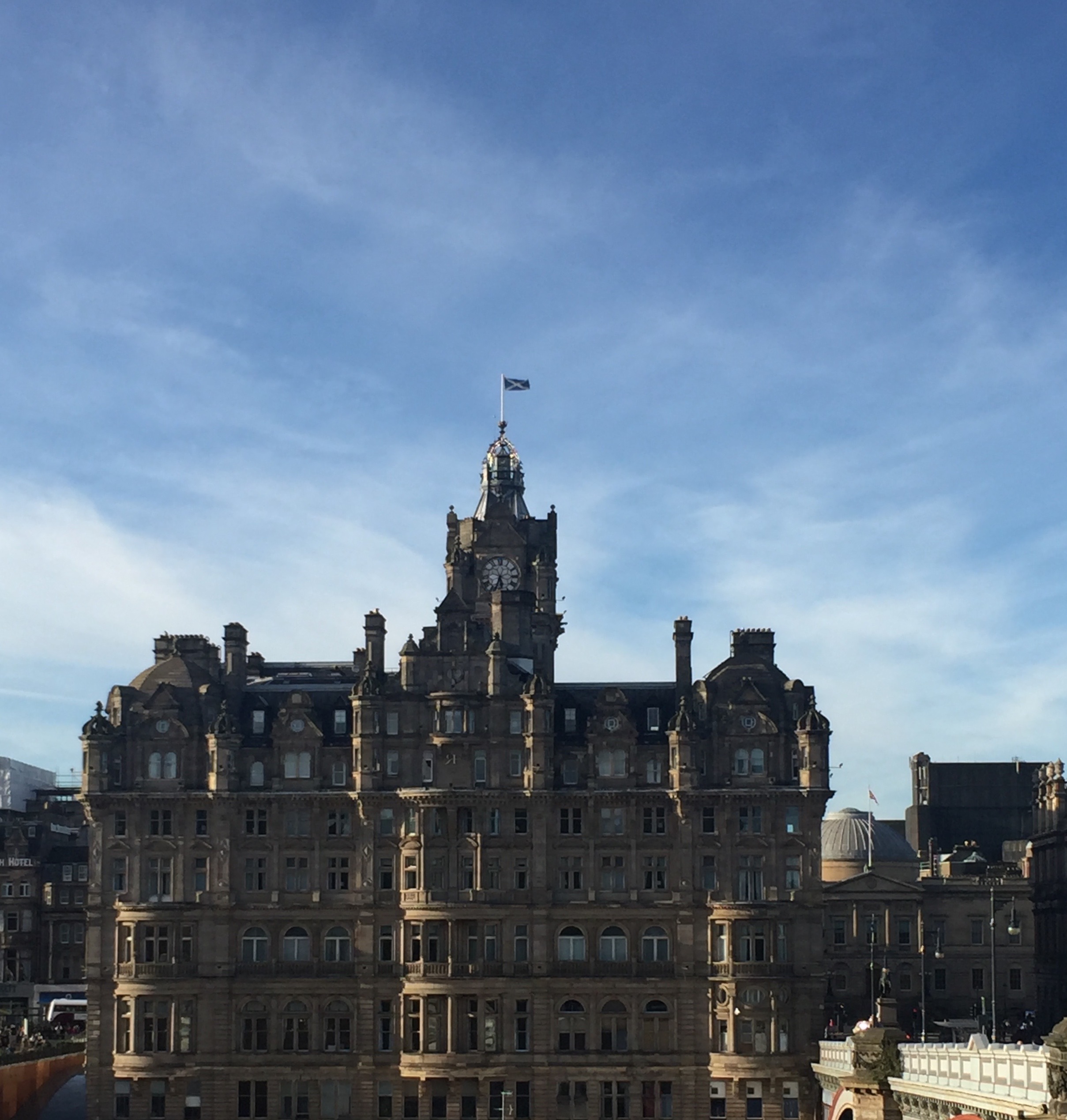 For a slightly more affordable option, I would definitely recommend the Radisson Blu Edinburgh. Smack dab in the center of Old Town, the location could not have been more convenient. The rooms were also extremely comfortable and the hotel offered all of the modern amenities that you could want, including a large breakfast buffet!

1. The Royal Mile. The Royal Mile runs straight through the center of Old Town Edinburgh, from Holyrood Palace up to Edinburgh Castle. Along the stretch, which is actually just over a mile, you will find plenty of shops, pubs, street performers and age-old stone buildings. 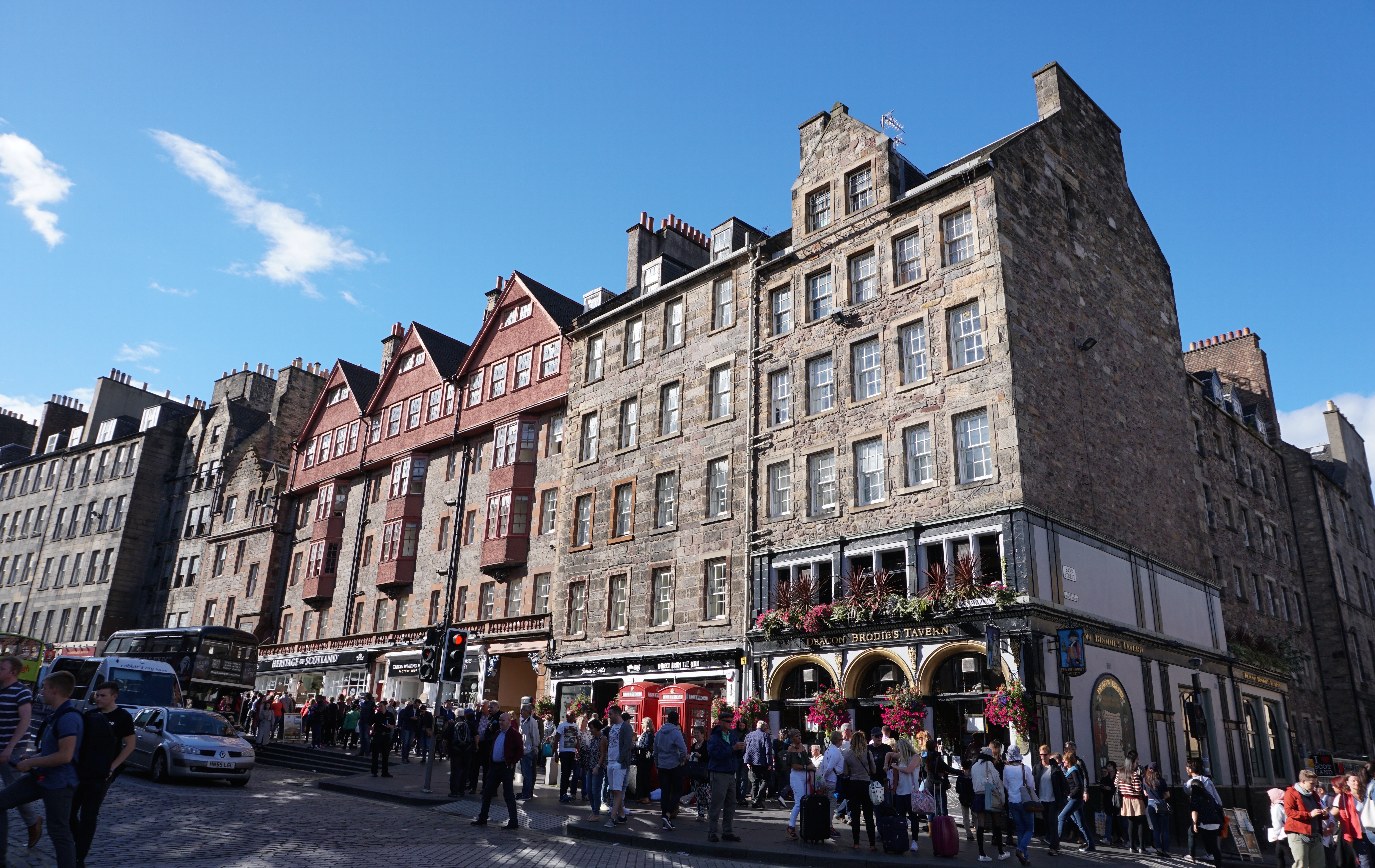 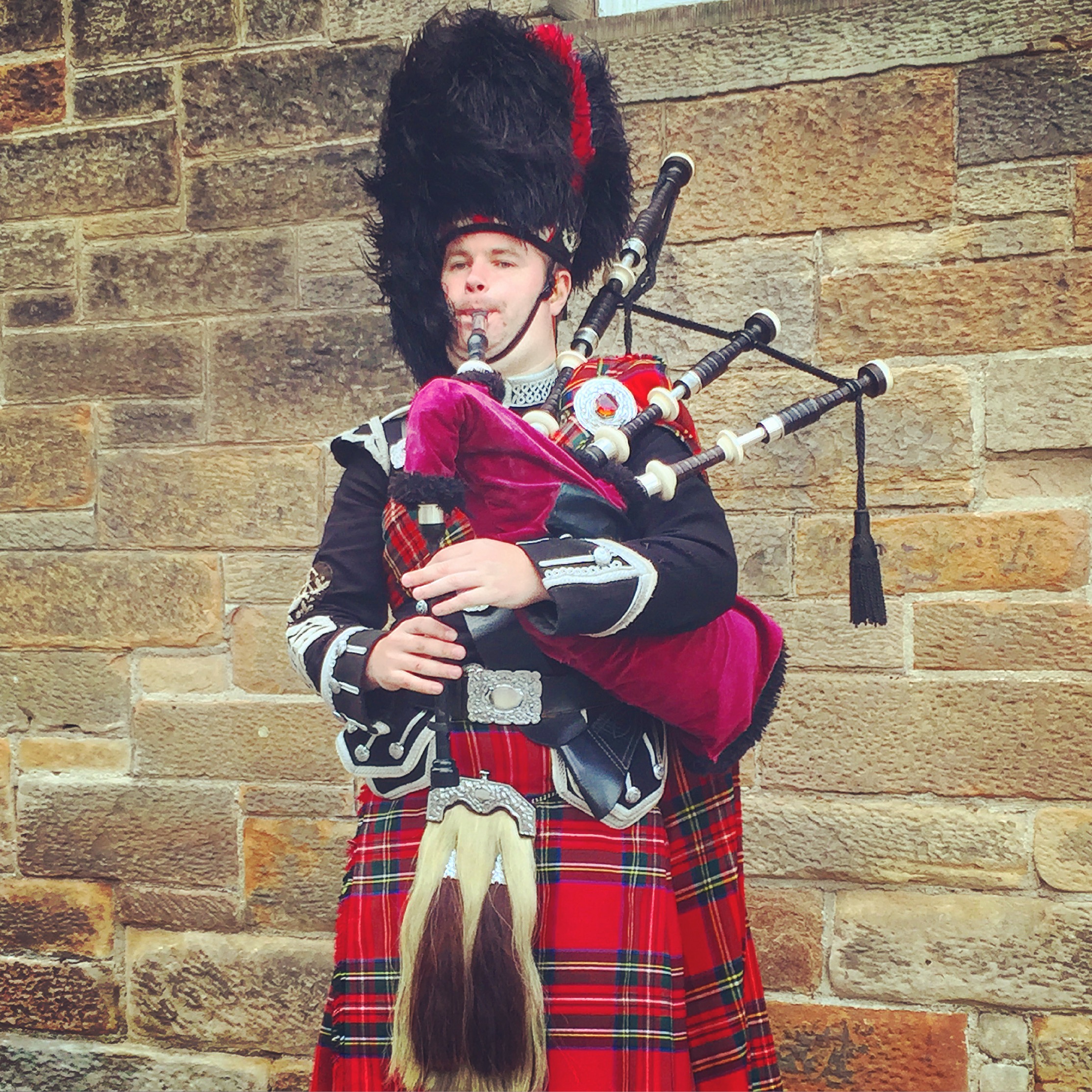 2. Edinburgh Castle. Definitely a must-see for any visitor to Edinburgh! This historic fortress sits atop Castle Rock, a volcanic plug from an extinct volcano system dating to the Carboniferous Age. Tickets to the castle include a free guided tour (generally these start every 15 minutes), which I recommend since there is so much to see here. 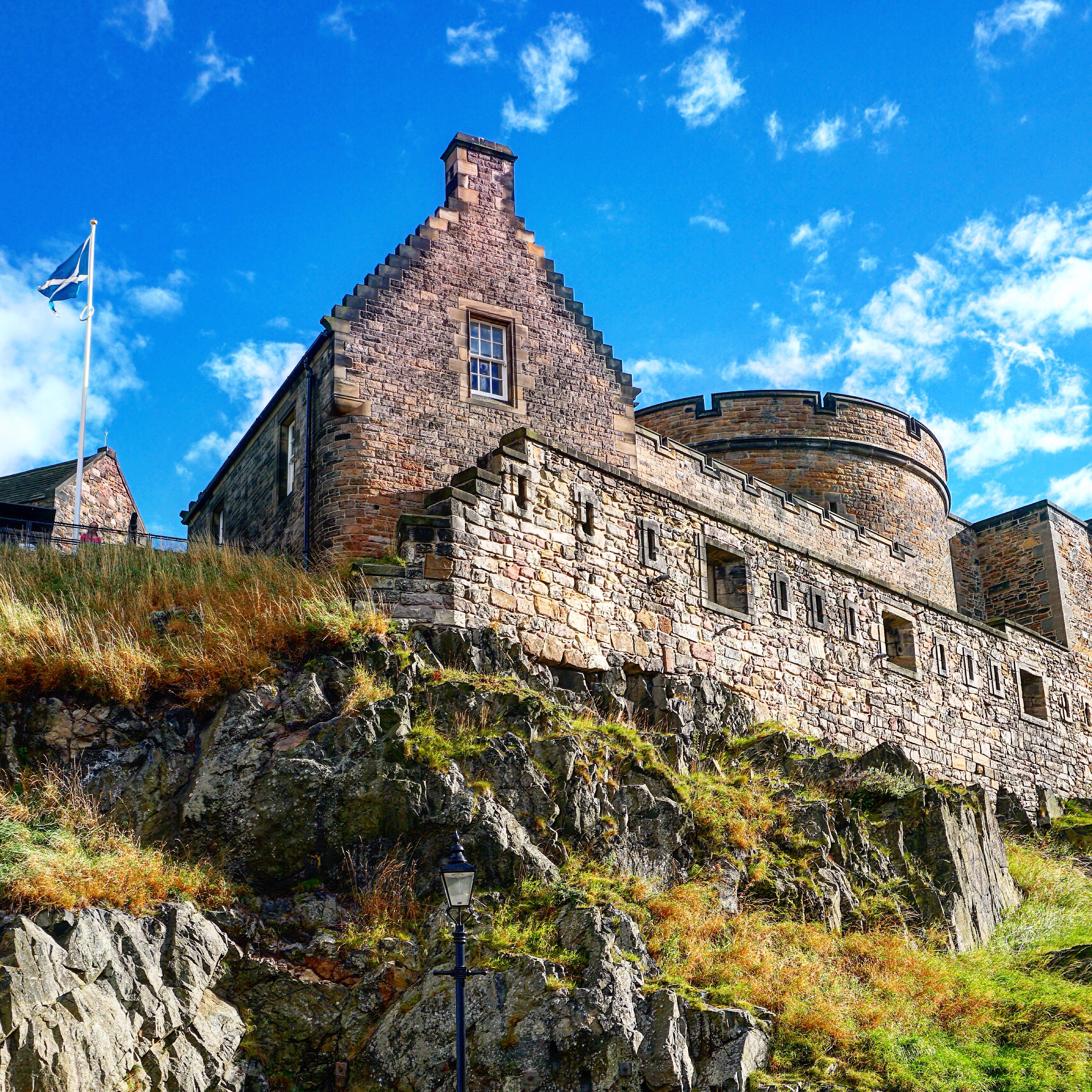 The castle served as a royal residence from the 12th-15th centuries, when it then became a military barracks. It was in a small room in Edinburgh Castle that Mary, Queen of Scots gave birth to her son James, who later became James I, the first joint king of England and Scotland. In addition to old chapels, dungeons, bedrooms and banquet halls, the site also houses Scotland’s Crown Jewels as well as the Scottish National War Memorial.

3. Holyrood Palace. Also known as The Palace of Holyroodhouse, this serves as the seat of the monarchy when they are in residence. Admission includes an audio tour, which I definitely suggest since there are no placards at all in the house (we actually had to go back to pick up the headsets when we realized we weren’t learning anything just by walking through!). 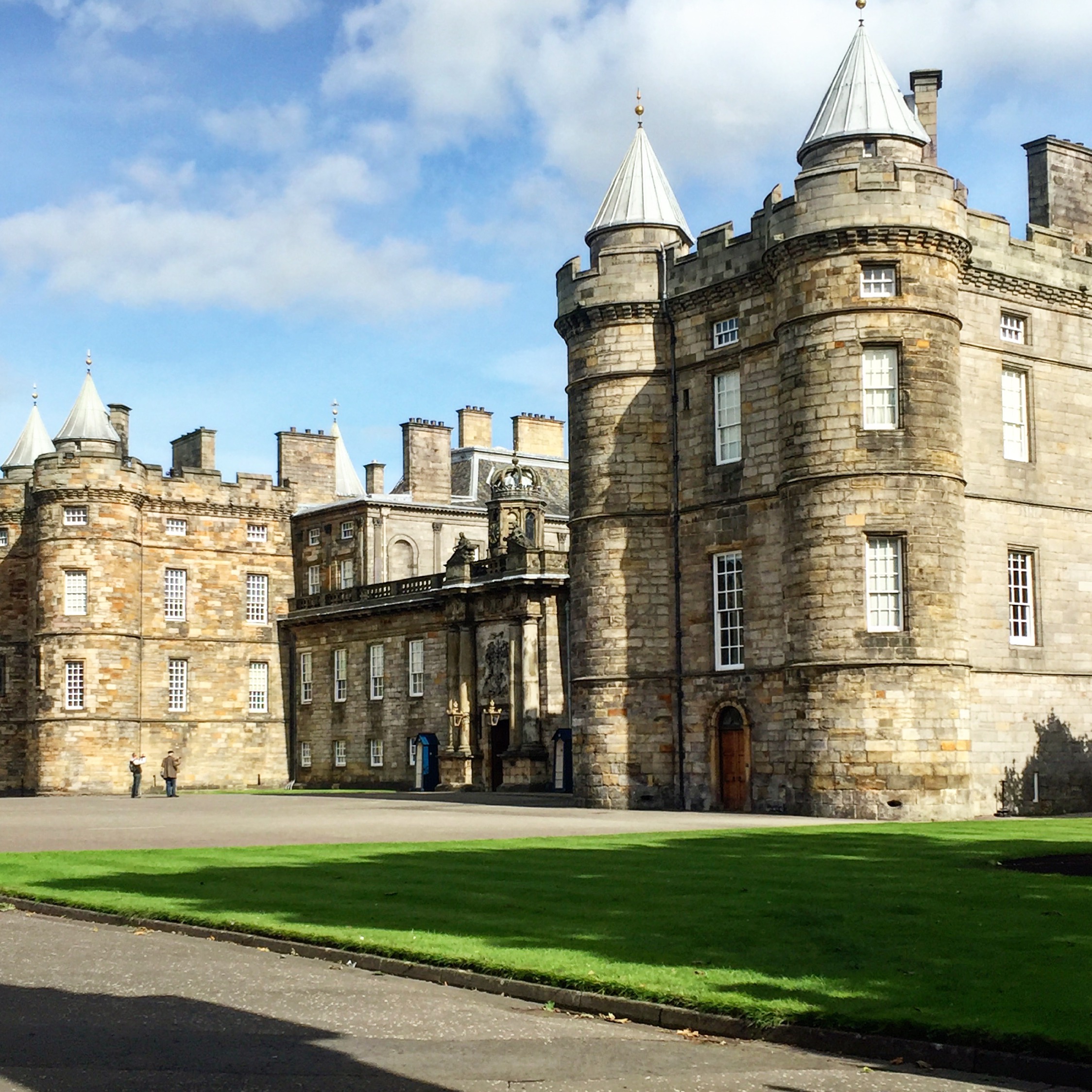 In addition to seeing the great halls and dining rooms where Queen Elizabeth II entertains during her visits to Scotland, the palace also offers plenty of history around the Stuart Dynasty, including the plight of Mary, Queen of Scots. Adjacent to the palace, there is also a beautiful ruin of a cathedral set among very scenic gardens and a stunning view of Arthur’s Seat. 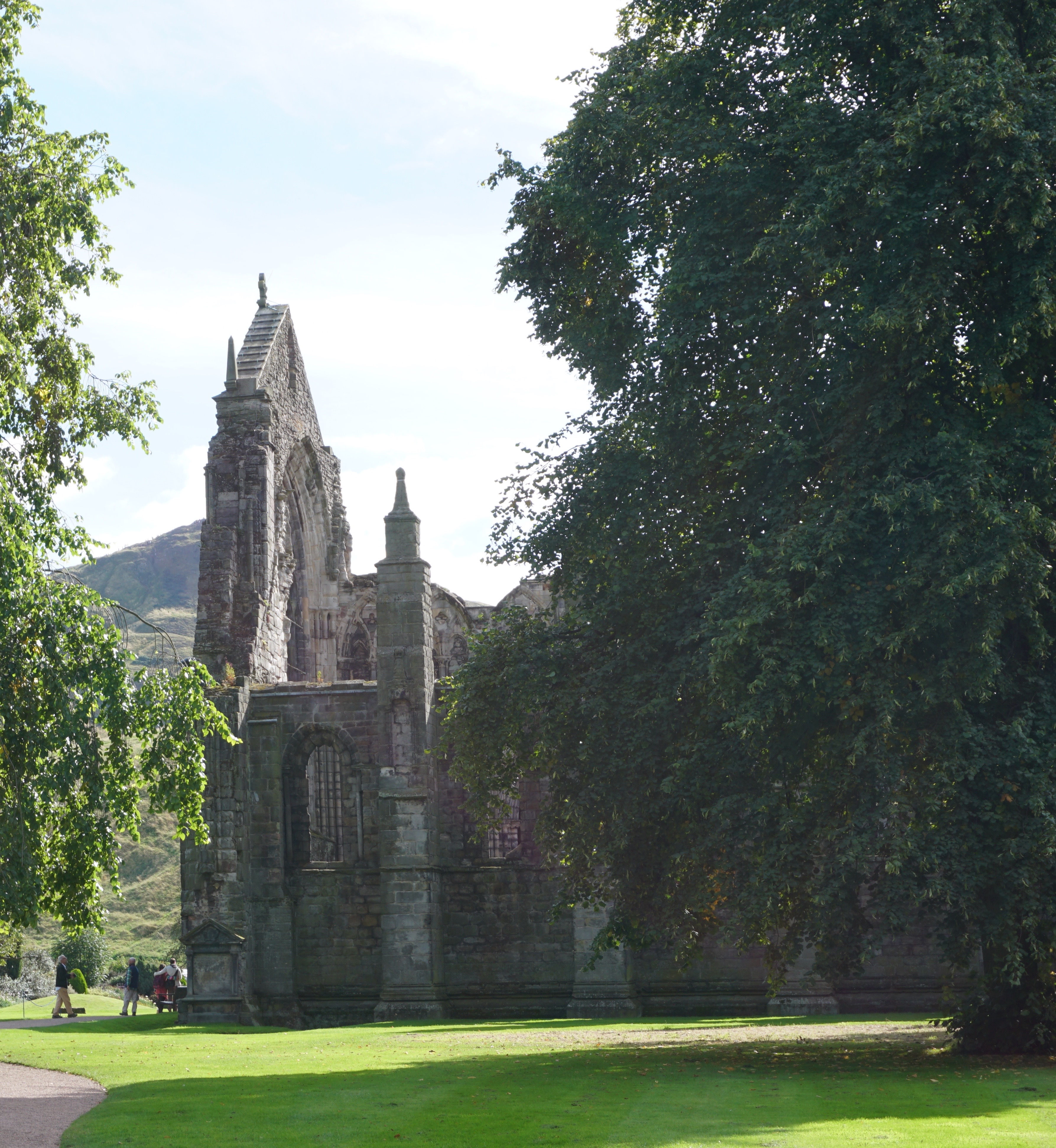 4. Arthur’s Seat. I could not get over the fact that this amazing hike was so close to the center of town. From our headquarters at the Radisson Blu, the top of Arthur’s Seat – a series of hills (from the same extinct volcano chain) in the center of Holyrood Park – was just about a 2 mile walk. We were lucky enough to visit on an absolutely picture-perfect day where the grass was as green as could be and the sky was brilliant blue. The top of Arthur’s Seat is a great place to enjoy a picnic and take in the impressive views across the city. 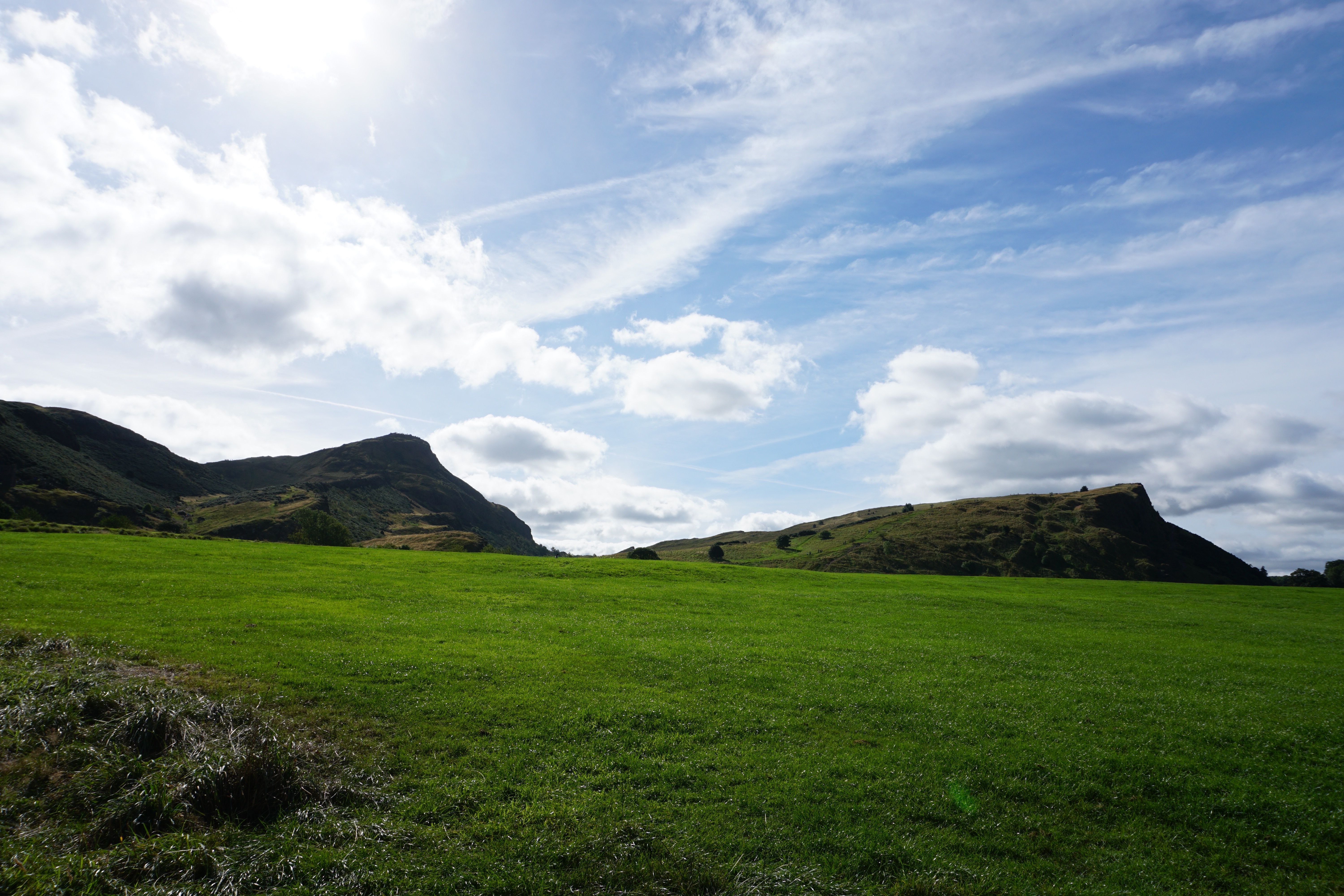 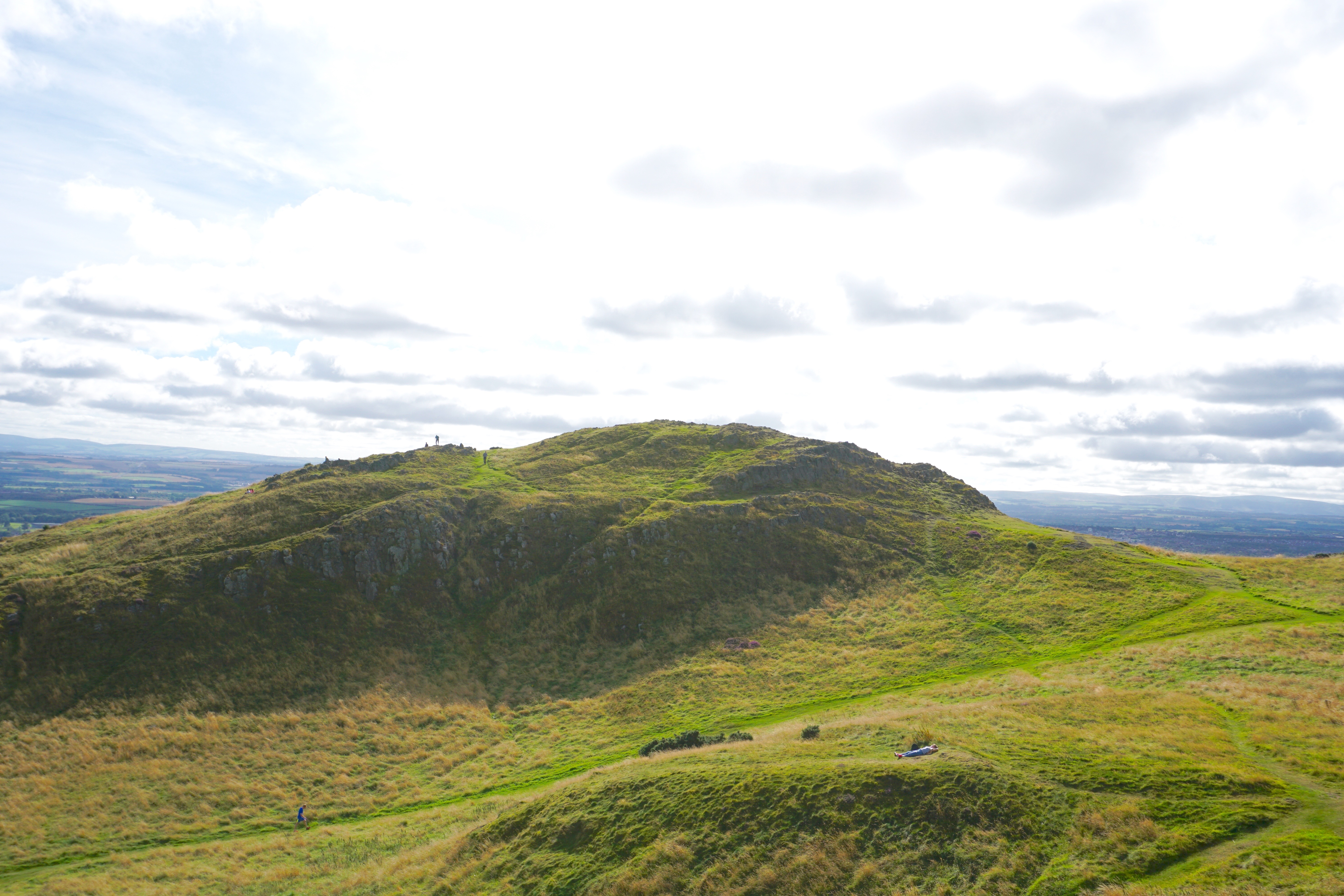 5. Scotch Whisky Experience. Aside from tartan and bagpipes as I noted in the title of this post, Scotland is definitely known for Scotch whisky, which can only be made in Scotland! The Scotch Whisky Experience, located along the Royal Mile just below Edinburgh Castle, offers daily tours explaining the production of this national beverage. They also have a great gift shop and a restaurant and whisky bar called Amber. 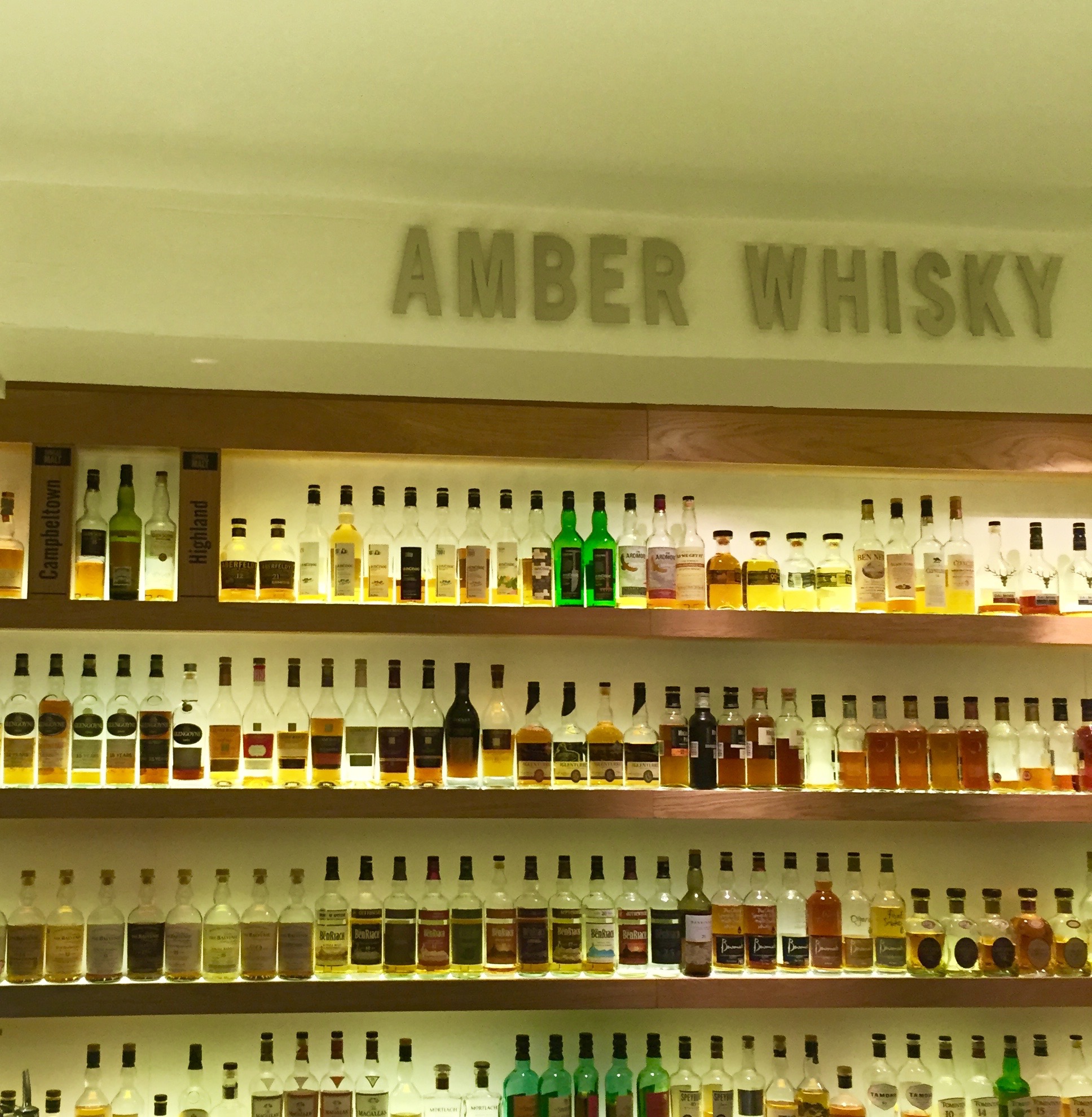 6. Following in JK Rowling’s Footsteps. During the years that J.K. Rowling was writing the Harry Potter series, she lived in Edinburgh and as a result, there are many spots in the city famed for inspiring the stories. As a huge “potterhead” myself, I felt compelled to follow World of Wanderlust‘s advice and see the Top 5 Things To Do in Edinburgh For Harry Potter Fans. The Elephant House and The Balmoral Hotel are two locations where J.K. Rowling is reported to have spent significant amounts of time writing the books. While the Elephant House was a bit crowded and touristy as a result of this acclaim, I still snapped a pic from the street. 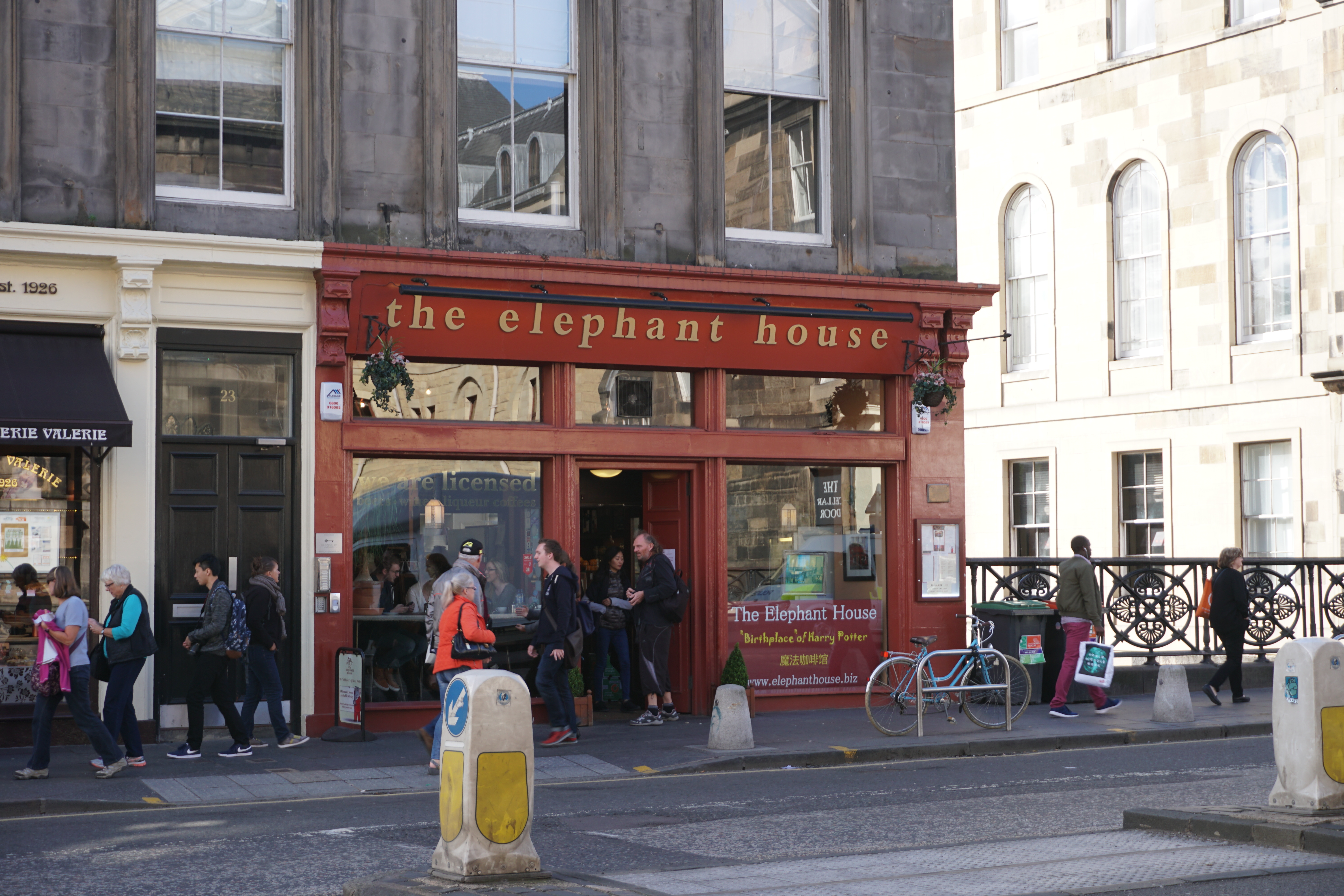 I was most excited to visit Greyfriar’s Kirkyard to find Tom Riddle’s grave, which may have subconciously influenced Rowling’s name for Lord Voldemort in the series, as she frequently walked through the Kirkyard on her way home from the Elephant House. From the Kirkyard, you can also glimpse George Heriot’s School, which was said to be a major inspiration for Hogwarts. 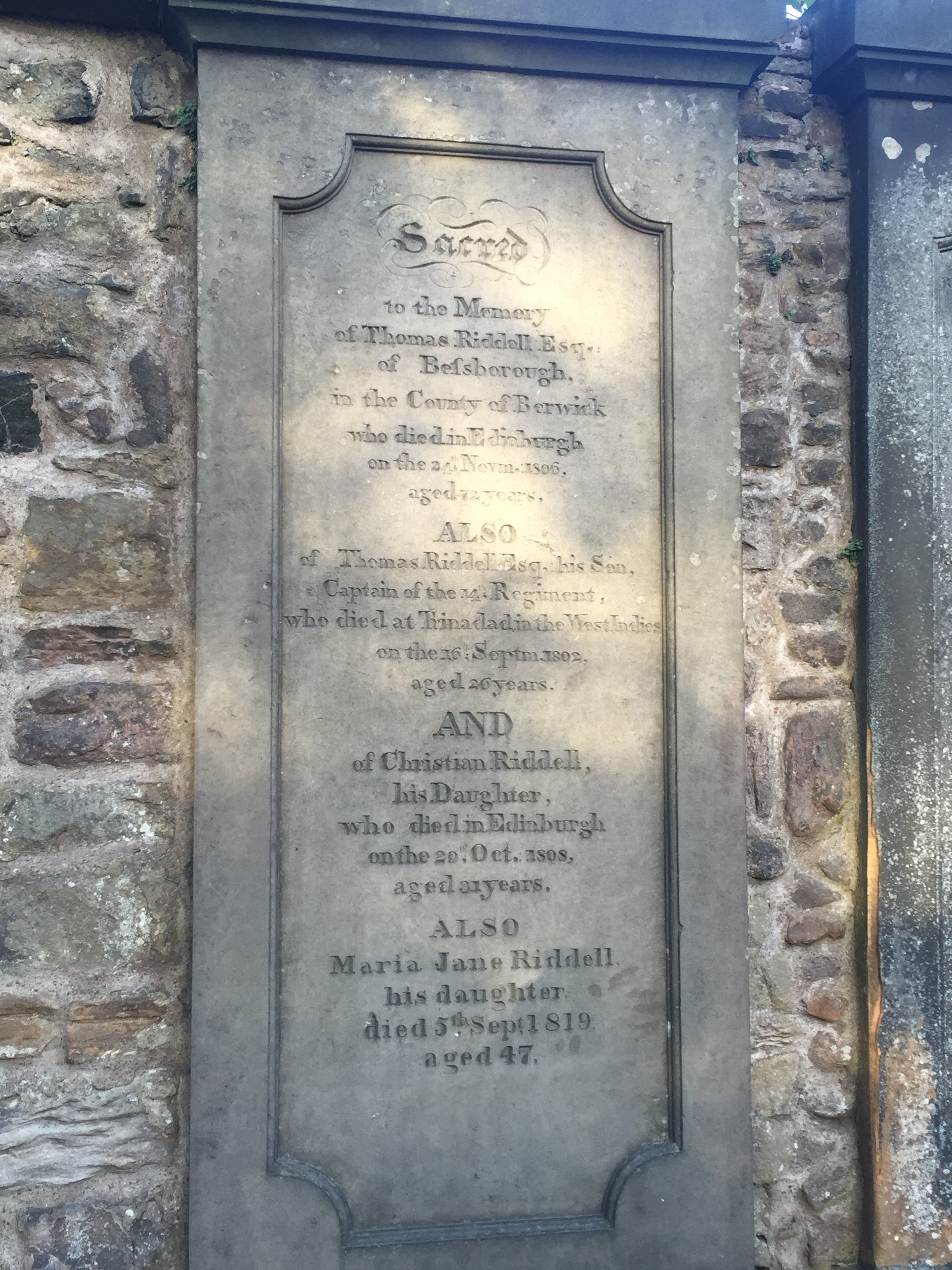 7. Ghost Tour. Beneath the city, there is a labyrinth of vaults that were used for storage by merchants. Long since abandoned, these underground rooms are now said to be haunted and many historical tour operators in the city also offer ghost tours through the vaults in the evening. On our last night in Edinburgh, we did the Evening of Ghosts and Ghouls tour with Mercat Tours. The two hour experience included tales of witchcraft and torture at Mercat Cross along the Royal Mile, candlelit ghost stories in the vaults themselves, and to cap off the evening, a complimentary beverage in Megget’s Cellar. Our tour guide, Louise, was perhaps the best storyteller I have ever heard and I was thoroughly entertained the whole evening!

WHAT TO EAT & WHERE

I was pleasantly surprised by the quality of food we found in Edinburgh. I had expected more traditional pub fare, yet instead we found quite an elevated and diverse culinary scene. Along with Scottish Whisky, no visit to Scotland would be complete without trying traditional Scottish dishes, such as:

A couple of our favorite restaurants in Edinburgh were:

While there really is so much to see and do in Edinburgh, I was eager to get out of the city and explore some of the countryside and smaller towns as well.

1. Loch Ness & The Scottish Highlands. Rather than rent a car and worry about driving on the other side of the road, we booked a full day trip to Loch Ness with Highland Explorer Tours. We chose the Taste of the Highlands Tour, which included a gourmet three-course lunch of traditional Scottish fare at The Lovat Hotel in Fort Augustus. The highlands were truly breathtaking and I was so happy we had a chance to visit. 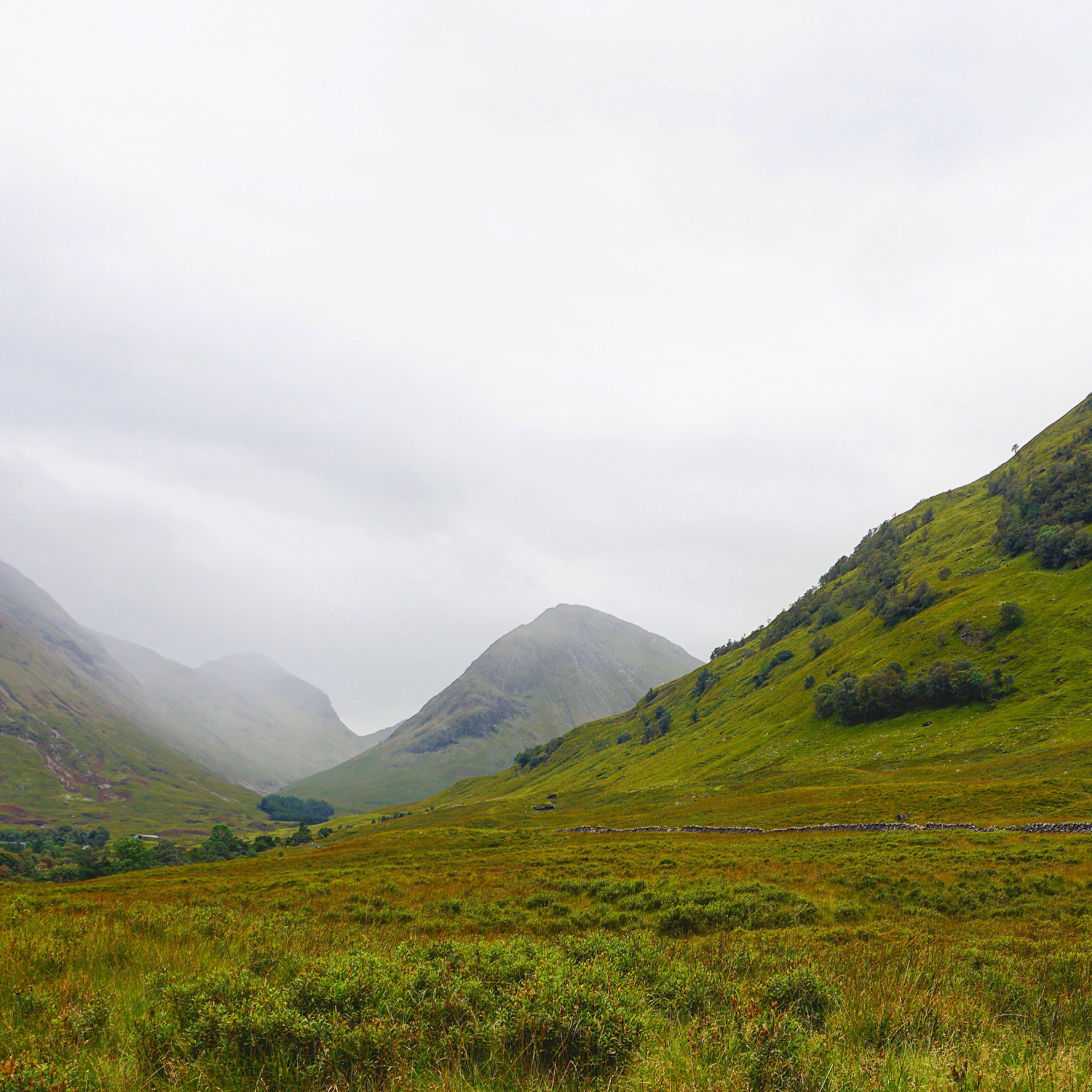 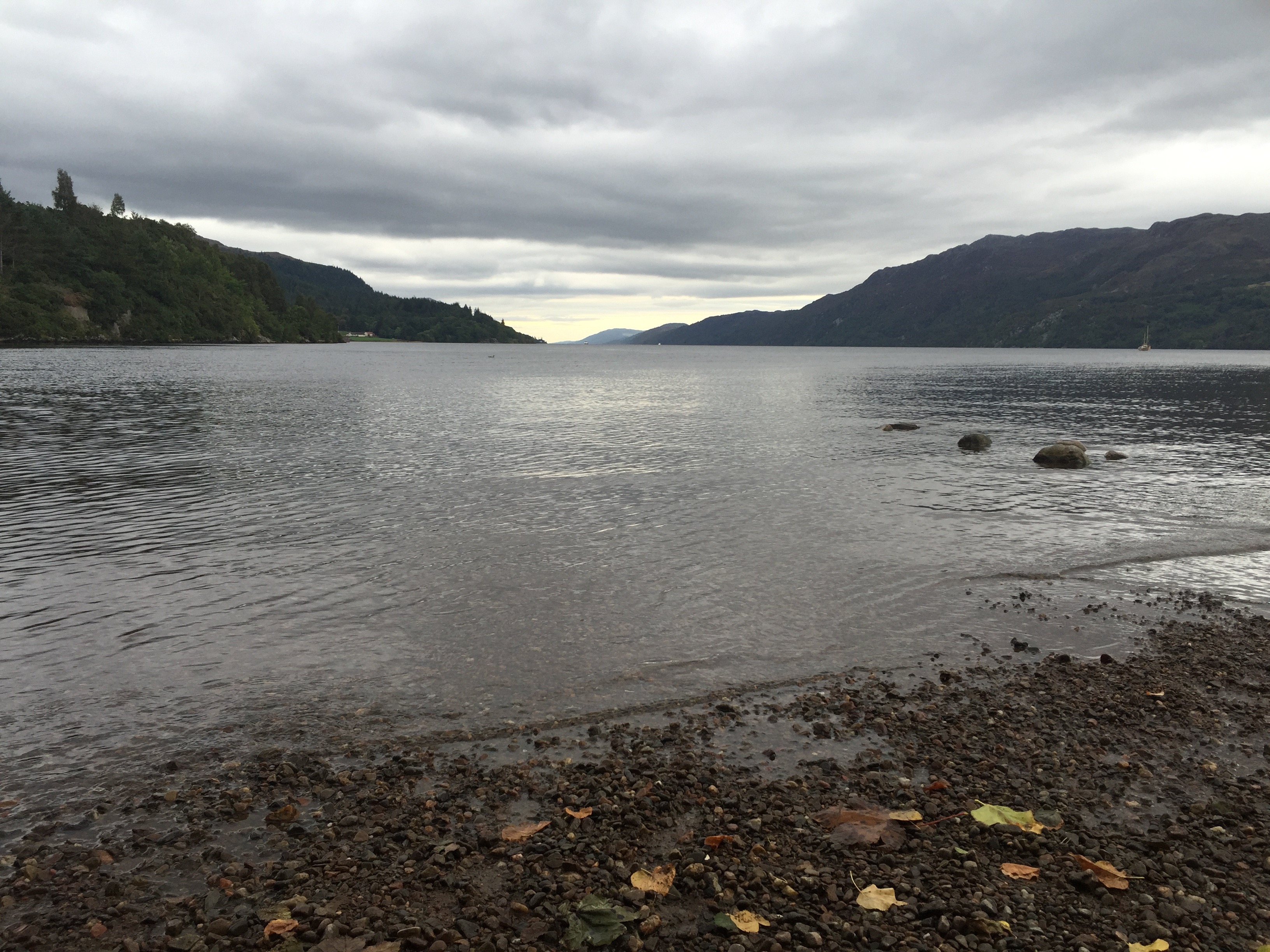 The downside of this tour is that Loch Ness is quite a trip from Edinburgh, so we spent a fair amount of the day on a bus. However, the upside was that our tour guide was extremely knowledgeable about Scottish history and culture, so we learned a ton! If we’d had a bit more time, I would have booked one of the multi-day tours offered by Highland Explorer so that we could have spent more time out in the countryside, as it truly was so relaxing. 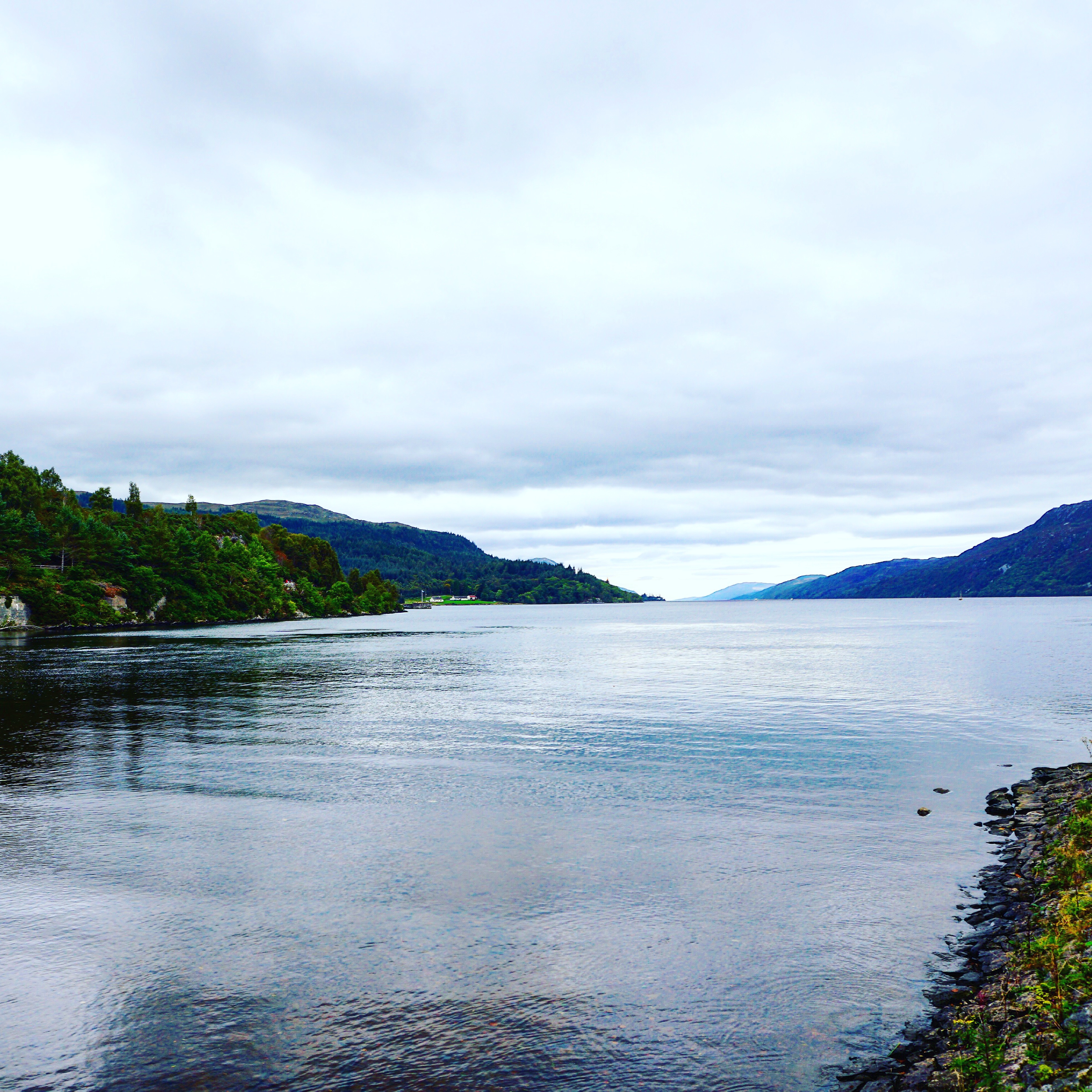 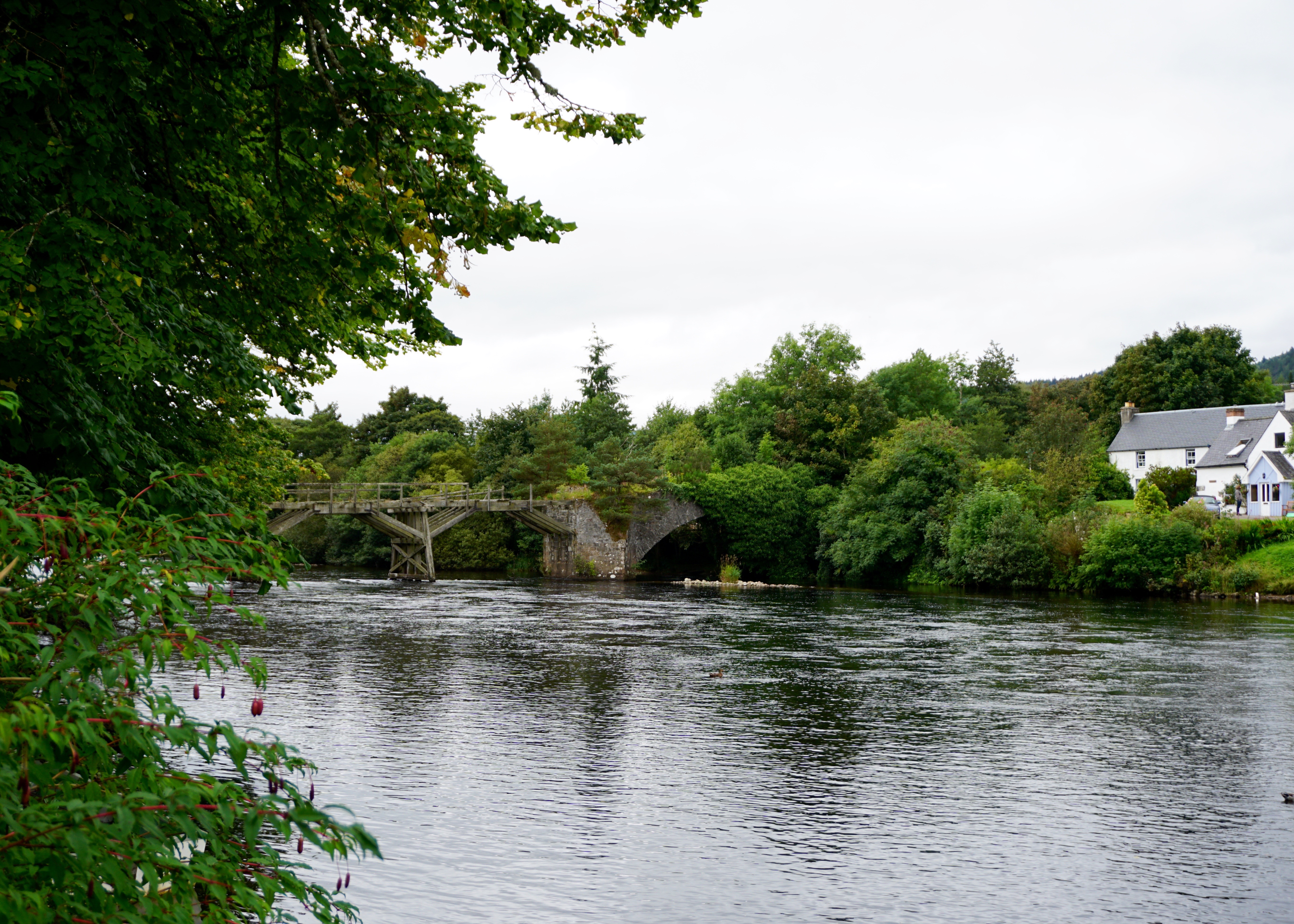 2. St. Andrews. About an hour from Edinburgh by train (take the ScotRail to Leuchars, where you can hop a free shuttle or grab a taxi to drive the 10 minutes into St. Andrews), St. Andrews makes for a really easy day trip – or even half a day. Known as the golf mecca of Scotland, St. Andrews is also very much a university town, home to the University of St. Andrews, Scotland’s first university which was founded in 1413. 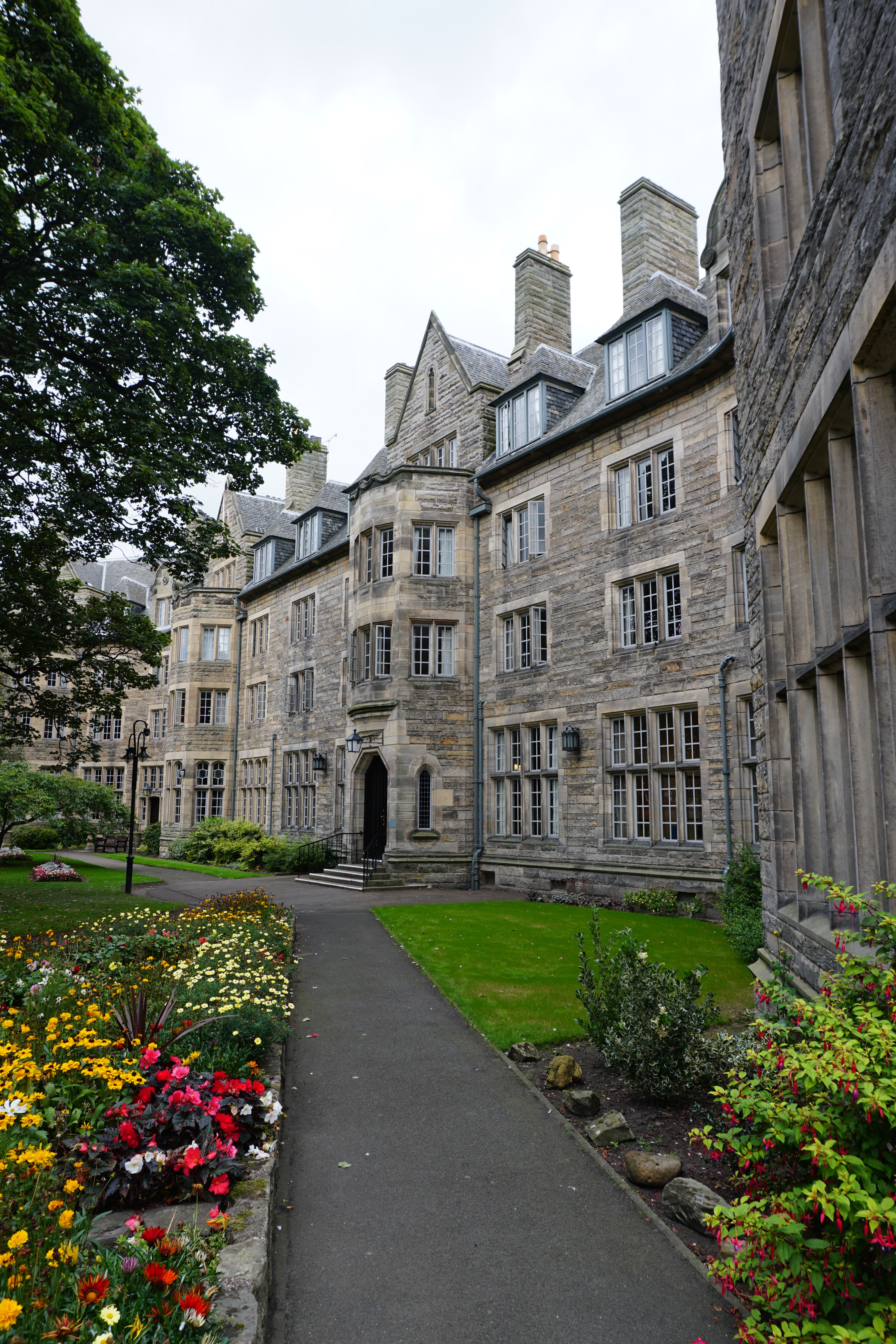 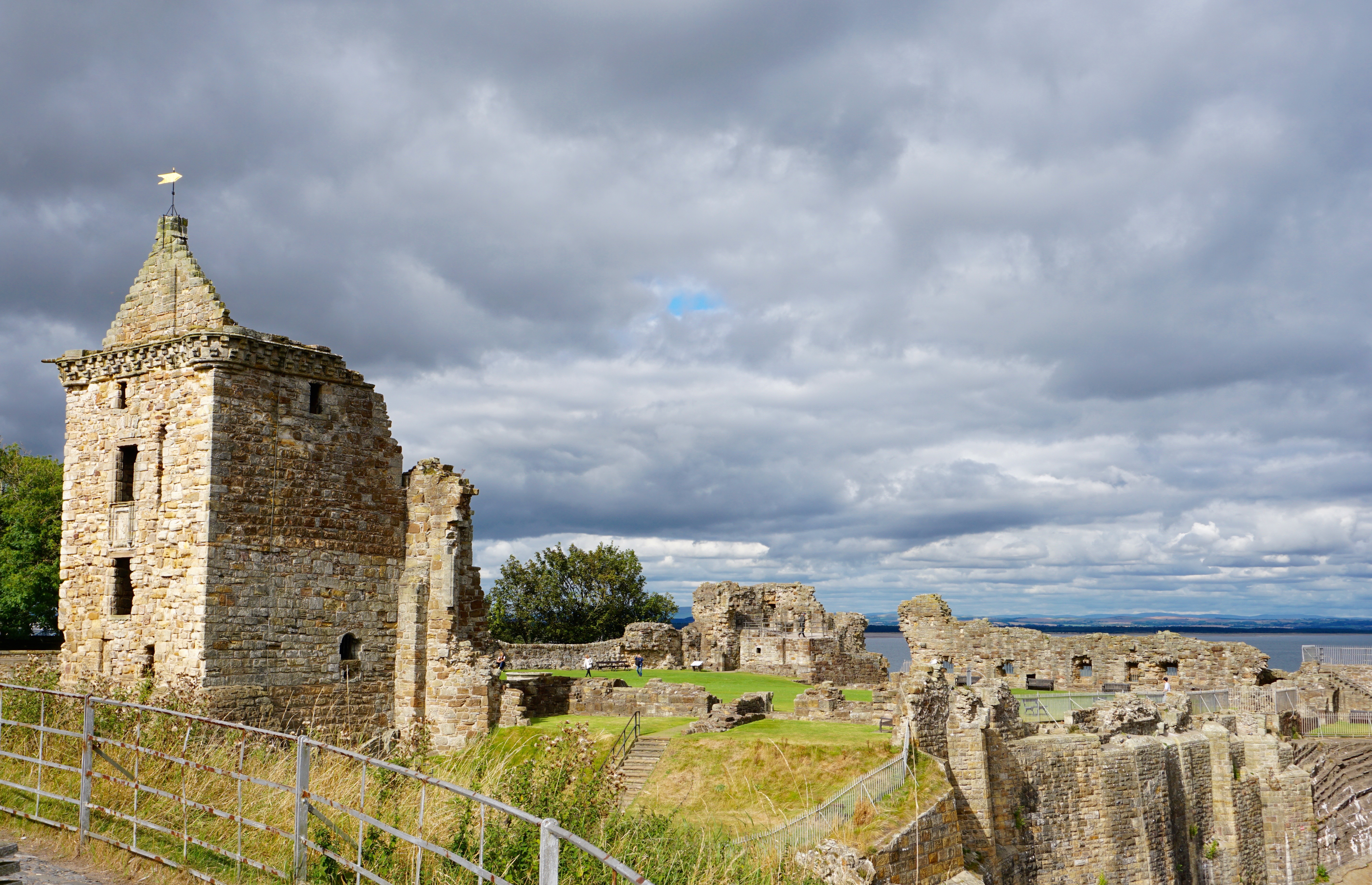 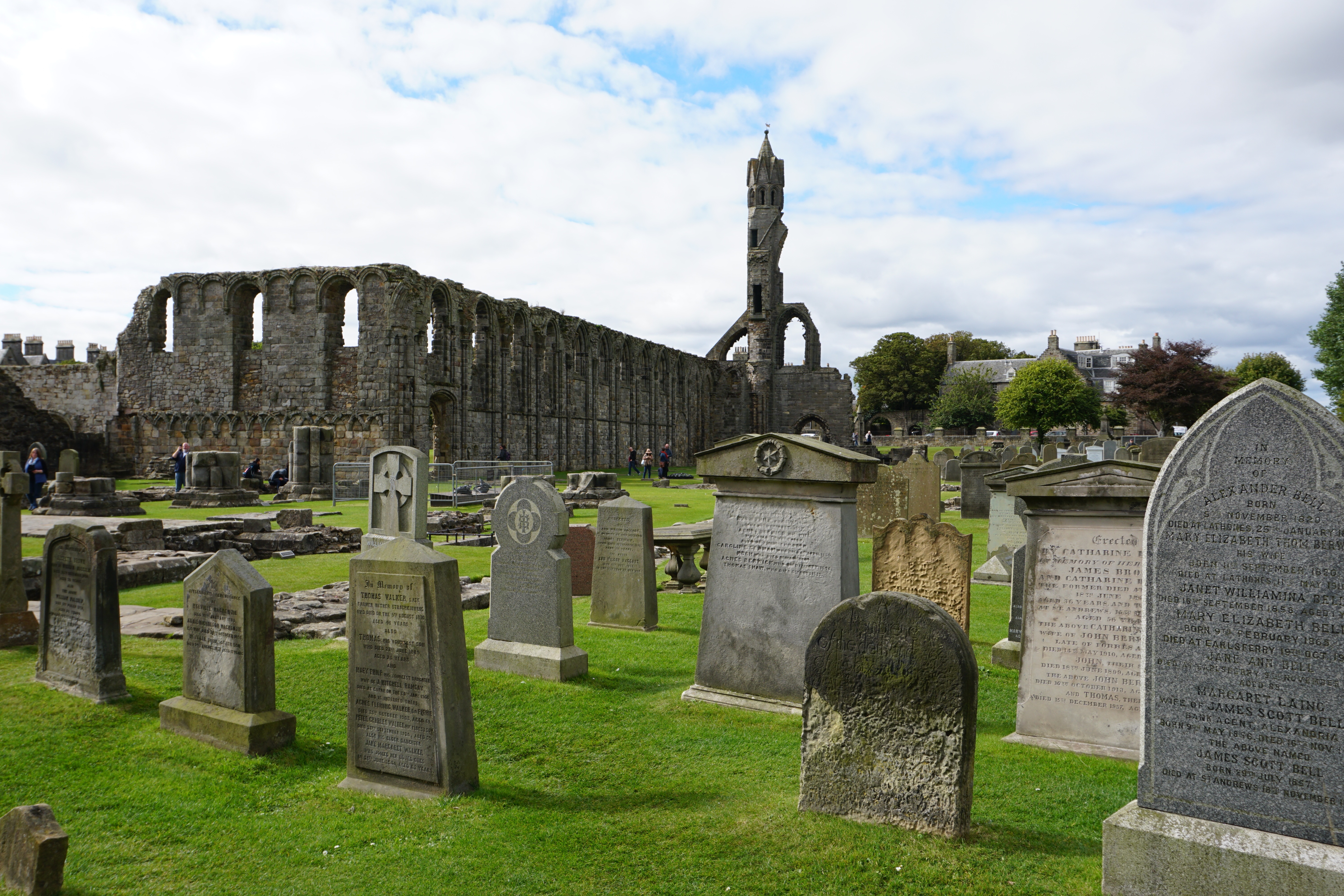 And lastly, if you have time for lunch in St. Andrew’s, head to The Adamson. This was perhaps the best meal we had in Scotland, which makes sense because it was named Scottish Restaurant of the Year in 2015. 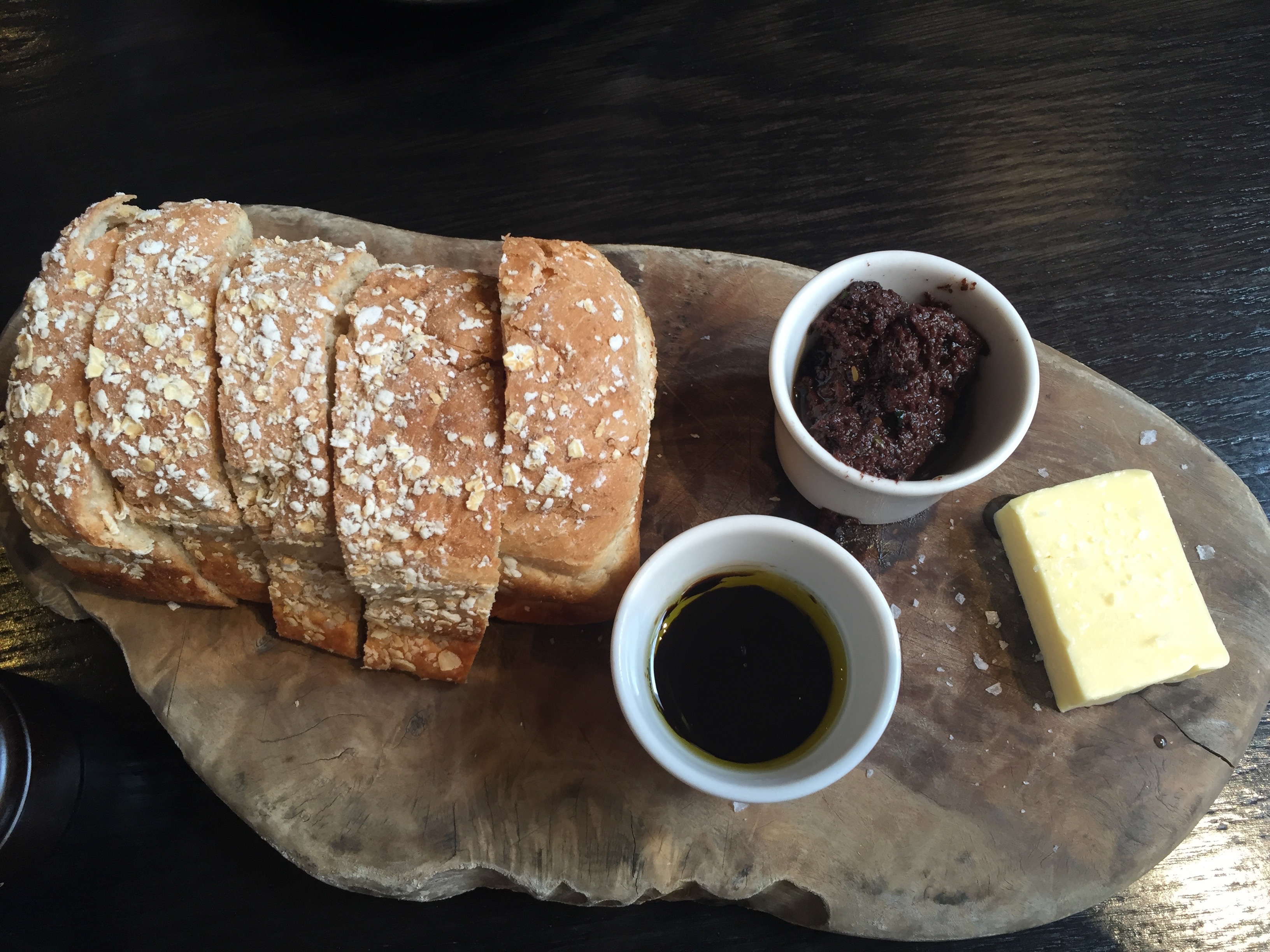 The food was so fresh and tasty and the cocktails were so innovative (dry ice anyone?). But my favorite was this warm homemade bread with butter and of course, the sticky toffee pudding with vanilla ice cream – it was just divine!

We had an incredible time visiting Scotland and I can’t wait to come back! 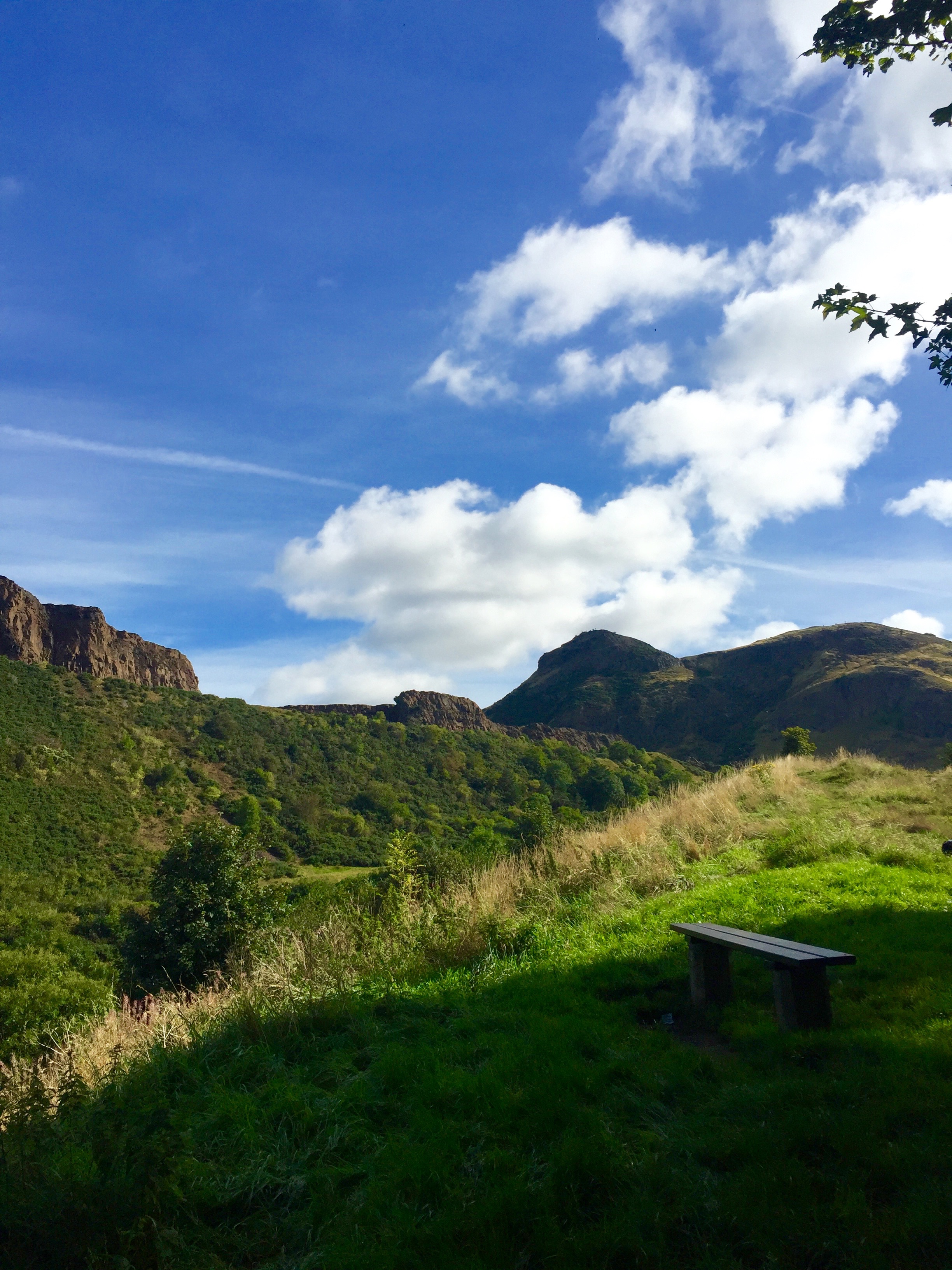